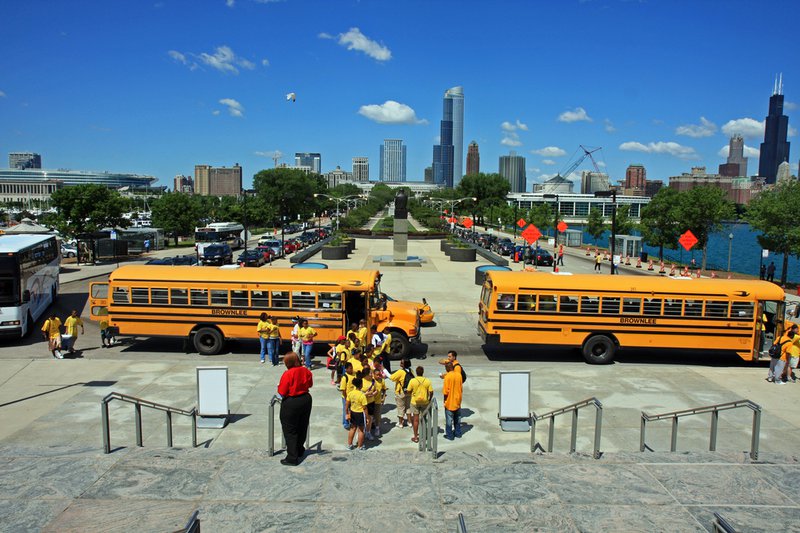 On Tuesday activists flooded the Chicago City Council, stating the case against a $95 million investment in a new Chicago Police Department academy. Notably, many of those present were education advocates, confused about and frustrated with the allocation of such a massive amount of money to a scandal-ridden police department, while the Chicago Public School (CPS) system struggles to support its students. But, promisingly, many of those taking a vested interest in seeing CPS funding improve are from the CPS system itself. Chance the Rapper, for instance, was there. Students from an imminently-closing, predominantly black and low-income elementary school were there. And they all raised the same central issue: The city council was willing to spend $95 million on a police initiative in the West Side, a largely black and Latinx community, but not willing to make similar efforts to improve schools in the same area.

In Chicago, your experiences with education, among innumerable other arenas, are often largely determined by your zip code. Chicago has, at turns, been described as a “laboratory of segregation” with a “legacy of segregation… probably more ingrained than in any other city in the country.” Chicago is massively unequal when it comes to determining the distribution of resources provided to its citizens, and this practice almost exclusively falls along racial lines. The black and Latinx communities, living predominantly in the South and West sides of the city, receive far fewer benefits than the whiter, more affluent North Side.

And it’s exactly one of these benefits that activists were fighting for at City Hall earlier this week—an adequate, well-funded education.

I myself was privileged enough to receive this type of education, due in no small part to my zip code. My high school, appropriately titled Northside College Prep, is one of a system of 11 selective-enrollment high schools in the city that uses middle-school grades and standardized test results to determine admission. Getting into any of these schools is brutal—I knew students who lied about their home address to gain residency, as well as others who spent thousands of dollars on test prep materials to secure high test scores. The competition, in other words, is real. In the 2015-16 school year, 13,413 students applied for only 3,600 spots. Unsurprisingly, many of the students who have advantages when it comes to gaining enrollment also come from affluent North Side families. Elaine Allensworth, director of the University of Chicago Consortium on Chicago School Research, refers to this system as “triple segregation”: first residential, then economic, and then, by way of selective-enrollment, achievement.

But as CPS pushes for the continued improvement of selective-enrollment schools, they also pull from other areas in need. The budget cuts CPS revealed for 2016 reduced funding for 443, or 67 percent, of the almost 660 schools in the district. Of the selective-enrollment schools, though, only three, or 27 percent, would lose money, and two of those schools, Southshore and King, are on the South Side. You could argue that these budgeting changes were made based on fluctuating enrollment, but on closer inspection of my old high school, you’ll notice that enrollment was actually going down, while the budget increased by $261,134, to just over $7 million.

My selective-enrollment high school experience should be standard for every CPS student. I graduated with nearly the entirety of my class after my fourth year at Northside, and set off to college with a scholarship. I benefitted immeasurably from the personal attention, dedication, and resources within my grasp for those four, formative years. Because of this education, I was afforded a crucial degree of upward social mobility and had a much better chance than most CPS students of graduating college and finding a well-paying job in my chosen field afterward. But this experience of adequate education is inaccessible to too many Chicago students.

So, what are people doing about it?

Currently, there’s a movement to abandon the selective-enrollment model and instead focus on bolstering support for community schools via providing them with the tools needed to propel students toward achievement. Increased attention to community educational needs, as opposed to laser-focused support for high-achieving students, is one crucial way to make moves toward righting historical segregational wrongs, as is funding these noble ambitions (though, of course, getting money to where it’s needed most is itself a dizzyingly unwieldy task).

I know what this sounds like—empty words from someone no longer affected by the system. Someone who benefitted and left and knows no one who would be directly impacted by the changes I support. But that’s exactly the lens Chicagoans need to abandon. We’re all affected by CPS policy, because that policy has a towering impact on the social mobility of city residents and, consequently, on what the city will look like for generations to come. Leaving that policy unchanged would do little more than reinforce over a century of racist history that’s led to severe divergences in the outcomes available to citizens. Improving those policies, however, would engage residents in a more equitable culture, and open up more opportunities. This isn’t the only way to fix these issues, but it’s a step in the right direction. That is a future worth fighting for, and that is a future in which all Chicagoans, regardless of zip code, should be willing to create.