Chance the Rapper, Christianity, and Blackness 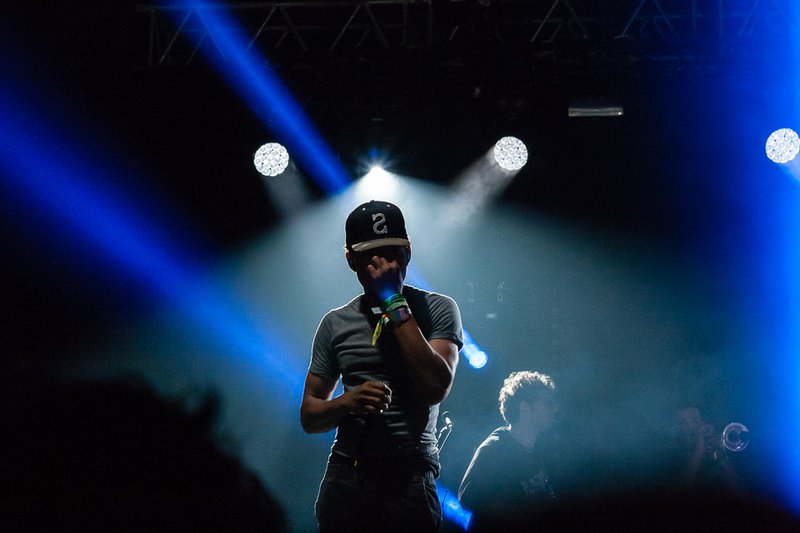 It’s hard to talk about this year’s Grammys without also talking about Chancelor Bennett—better known as Chance the Rapper. His mixtape, Coloring Book, was the first stream-only project to win the category of Best Rap Album. He also took home two additional Grammys: one for Best Rap Performance, and one for Best New Artist. His hardware victory wasn’t too unexpected, seeing as how Coloring Book spent the majority of 2016 receiving widespread acclaim.

But what came as a shock was Chance’s performance: To a viewership of 26 million, he used his platform to rap about God and Christianity and blackness in a way that the mainstream too often misinterprets.

To understand Chance’s unique brand of Christianity, and why it mattered especially at the Grammys, it’s worth rewinding for a moment. When in late December 2015 he became the first independent artist ever to perform on Saturday Night Live, he had already started settling into a new gospel-inspired sound that would propel him into the mainstream. His first mixtape effort, 10 Day, was inspired by a 10-day suspension for smoking marijuana. His second mixtape, Acid Rap, was influenced in part by drug use and in part by a feeling of indestructibility. Both saw critical acclaim and put Chance on the map. But they also reflected rough moments in his life—moments that’d eventually lead to a life-altering intervention and prayer from his grandmother.

It wasn’t until Surf, an album by Chance-affiliates Donnie Trumpet and the Social Experiment, that fans would see how Chance’s family shapes his music. His heavy involvement with the project, released in the summer of 2015, made Surf feel both like an extension of Chance’s musical will and a sign of things to come. “Sunday Candy,” Surf’s lead single on which Chance was featured exclusively, contributed to the latter. More of an evolution than an extension—a combination of piano, soul, and nostalgia—it introduced a Chance that had finally come into his own, and it hit a note that resonated with fans and critics alike. Chance used his first performance on SNL to debut a new single, but his performance of “Sunday Candy” would debut something else: the gospel-influenced, authentically joyful, and familial style that would give birth to Coloring Book.

Sitting on a barstool in front of Jamila Woods, Donnie Trumpet, the Social Experiment, and an all-black church choir, Chance gave a performance of “Sunday Candy” that was slower and more deliberate than the mixtape version. He told us of his grandmother and her love, of Christmas dinners, and of Sundays at church, all wrapped in the harmonies of Jamila Woods and the church choir’s refrain. The link between Chance’s grandmother and religion—the clear theme of the performance—carried the rapper to the end of the song, where he stood up and began free-styling to the musical collective’s now spirited improvisation. It was at this point during the performance that he name-dropped Jason Van Dyke, an officer charged with the murder of Laquan McDonald, before finishing an impressive flow and bringing the performance to an end.

You don’t have to read between the lines to get the point: Chance wasn’t afraid to go onto a stage as wildly popular as SNL’s and be his authentic self—and this included rapping about his Christianity.

The performance did more than signal the trajectory of Chance’s musical evolution: It gave us insight into his unique brand of Christianity. It isn’t the stuff of coffee shop devotionals and megachurches. It’s not practiced in weekday young adult services. It isn’t hipster holiness, either; it doesn’t aspire to be cool or convenient, but vital. It looks like a grandmother, descended from slaves, at a black church in her Sunday best. And it’s precious and resilient in the same way an heirloom is. Chance’s religion is inextricably linked to blackness via family and community, and to an enduring hope through the uniquely black suffering that necessitates it.

In Chance’s music, the themes of Christianity, blackness, and hope/joy take many forms. Sometimes they’re brilliantly bound together in a single line as in “How Great” (“Good God, the gift of freedom / Hosanna Santa invoked and woke up slaves from Southampton to Chatham Manor”). Other times one of the themes stands out above the others, like in the joyful anthem “No Problem.” But seldom are they ever separated.

That last part is important. Like a number of other rap artists who have brought Christianity to the forefront of their art, Chance finds his songs co-opted by mainstream Christian thought, particularly by young Christians who appreciate that he’s unafraid to praise God in front of large audiences. But this praise often lacks depth, crumbling when it’s confronted with nuance. For instance, the idea of rejecting rap as art but loving what Chance does is flawed—if you don’t like rap and its complexities, his message isn’t for you. If you find yourself reflexively saying, “Actually, all lives matter,” any time someone says that black lives matter, or asking, “Well, what about black-on-black crime?” whenever someone talks about police brutality, but then cheer on Chance because he mentioned God at the Grammys, you’re deluding yourself. Of course, just because it’s not made for everyone doesn’t mean that everyone can’t acknowledge it. But giving Chance’s Christianity nuance is important for whom it reaches.

Mainstream Christian writers and magazines tend to celebrate Chance’s gospel as a phenomenon of evangelism that has seeped its way into spaces where it hasn’t traditionally been welcome. The truth, however, is that Chance’s gospel is just as powerful for an increasing number of Christian millennials finding it harder and harder not to join their religiously unaffiliated peers. The complexity of Chance’s Christianity puts it at odds with the shifting—and arguably deteriorating—landscape of mainstream Christian thought. For disenchanted Christian Millennials—specifically those of color—Chance’s profound faith is a reminder that there’s a place where we belong, because it was made for us, labored over for us, bled over for us—no matter what the rest of it looks like.

This idea explains Chance’s popularity among his secular fans, too. In many ways, the same idea applies to the American experiment, and on a larger scale, to life. Chance shows us that being authentic and belonging aren’t mutually exclusive, and that faith isn’t neat and tidy.

So the next time you see Chance rap about God—and trust me, he’ll do it again—remember that this is what makes him, and his brand of Christianity, worth talking about.