Beyoncé and the Endless Layers of Blackness 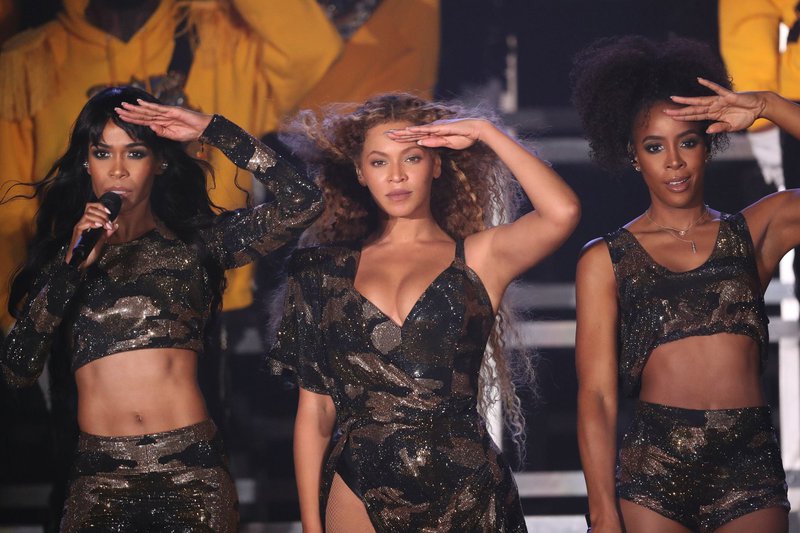 While I’ve long enjoyed Beyoncé’s work, like the blogger and author Luvvie Ajayi, until recently, I wasn’t a card-carrying member of the Beyhive, the name given to the singer’s enthusiastic fanbase. Over the years, though, I’ve increasingly enjoyed Beyoncé’s music, including her performances. For instance, I found her and Bruno Mars’ musical takeover of Coldplay’s 2016 Super Bowl performance spectacular. During the halftime show, Beyoncé explicitly celebrated global blackness and black womanhood, as she does on her two most recent albums, Lemonade (2016) and Beyoncé (2013).

In a similar vein, looking at the Coachella kickoff last weekend, it’s clear that Beyoncé hasn’t merely continued with these themes—she’s launched them into another realm entirely. More specifically, her performance at the festival was a love letter to black America, dusted with Afrodiasporic imagery, the traditions of historically black colleges and universities (HBCUs), women’s empowerment, and Southern flash and flare. Especially after last weekend, not to see the power of Beyoncé and her work is to miss what she means for black culture more generally.

In February, Ryan Coogler’s Black Panther blasted open discussions on broader notions of blackness. Via the dazzling world of Wakanda, the movie explores Afrodiasporic themes of class and culture. It also dives into African and black American cultural mores, and offers a beautiful visual representation of Africa’s many cultural traditions. These representations of African culture merge with Afro-futurism, creating new ideas of what a black future might look and feel like. For someone like me, who teaches African studies, the widespread enthusiasm for learning more about the continent—its politics, its clothing, its languages, its people—that emerged after Black Panther’s release was thrilling.

Likewise, at Coachella, Beyoncé inverted the Afrodiasporic gaze, pointing it inward as she focused on celebrating black American traditions. She exposed a mainly white audience to a different form of art, one centered on blackness in a more textured sense. As her mother Tina Knowles-Lawson wrote earlier this week on Instagram, Beyoncé was intentional about not bowing to mainstream conceptions of “palatable” blackness, instead prodding the audience to consider an oft-unconsidered vision of black power. Now, Americans of all races are looking to unpack and learn more about the range of cultural traditions she highlighted onstage. And black Americans, in particular, have been heartened by the singer’s bold illumination of their culture.

Put another way, what Black Panther did for Africa and the diaspora, “Beychella” is doing for black American culture.

For one, Beyoncé shone a light on black collegiate experiences. The show began with a female drum major calling everyone to attention, as dancers moved aside on a staircase to reveal Beyoncé—dressed regally in black and gold Egyptian-inspired regalia, with a motif of Nefertiti on the back of her cap. The significance of the dancers and marching band, which performed for most of the two-hour set, ought to be obvious, at least to black viewers. It let the world know about the distinct and creative nature of HBCU bands. In fact, Beyoncé hired band members from several HBCUs—including Florida A&M University, Alabama State University, and North Carolina A&T University, among others—to perform with her. These traditions are common not only at HBCUs, but also in high-school marching bands in the South, including in Beyoncé’s hometown of Houston, Texas.

Yet her embrace of black traditions didn’t stop there. She also centered black fraternities and sororities. In fact, Beyoncé went so far as to create her own co-ed organization for the performance: Beta Delta Kappa (though some suspect that the “B” and “K” actually stand for Beyoncé’s initials). One of the standout scenes came between her renditions of the songs “Formation” and “Sorry.” In it, she plays “big sister” to a group of male pledges. She’s unhappy with their attempts to entertain her. She and her group of “sorority” dancers haze the men, employing taunts and stomps that lead to a step-show. The women win and the men exit the stage, as Beyoncé and her dancers shift from taunting the “line” to performing “Sorry.” Beyoncé asks the women onstage (and, truly, everyone who’s watching): “Ladies, are we smart? Ladies, are we strong? Ladies, have we had enough?”

In all that, Beyoncé grapples with women’s frustration with gender barriers, at the same time bolstering notions of women’s power. More than that, though, while Beyoncé promotes empowering all women, she’s specifically concerned with what power means for black women. When she spoke about the significance of her performance at the festival, she said, with a wink: “Coachella, thank you for allowing me to be the first black woman to headline. Ain’t that ’bout a bitch?”

People will, most likely, continue to find fault with Beyoncé: with her art, with her activism, with the ways in which she embraces those whom society has long kept at arm’s length. Yet these dismissals say more about detractors than anyone else. Because to watch Beychella is to marvel at an artist who does more than just elevate herself—she unapologetically elevates key elements of black culture, too.