Is the United States on the Brink of a Child-Care Affordability Crisis? 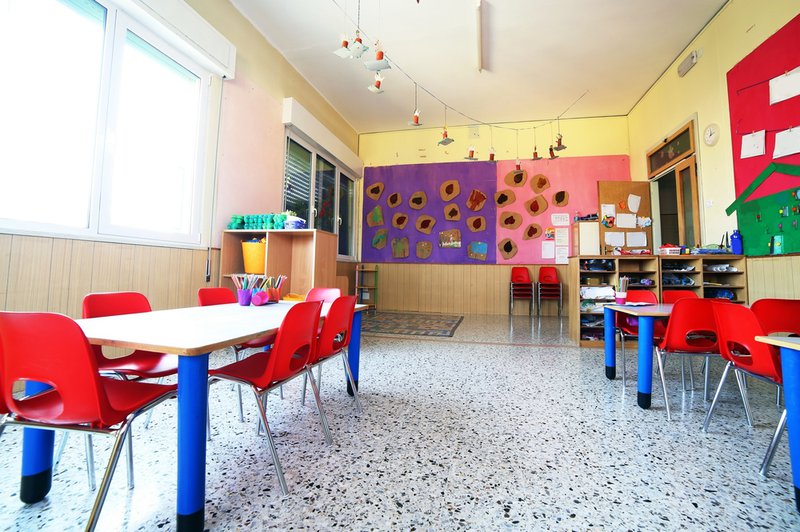 At the National Association for the Education of Young Children Public Policy Forum in February, a child-care provider approached the microphone. She asked the panelists an often unconsidered question: How was she going to keep her small business open and pay her staff, given the minimum wage increase in her midwestern state? While this may seem like the concern of a single provider, it shines a light on an impending crisis in child-care affordability in the United States.

To understand how, let’s look at the current child-care landscape. Compensation reform for the early childhood workforce is painfully overdue. As states and localities work to remedy these financial injustices, policy improvements—like subsidy rate increases and eligibility rule revisions—will be necessary. As the California Department of Education put it, “If nothing is done, many lower-income families will lose their child care, and child-care programs will close their doors, triggering further job losses and major disruptions to families.”

The effects of minimum wage increases are undeniably positive for child-care workers—and for children and families more broadly. Consider how raising wages by even one dollar per hour is connected to 9.6 percent fewer cases of child abuse annually. Higher minimum wages also result in lower infant mortality rates and higher birth weights. Childhood poverty, which affects some 20 percent of children in the United States, costs the country an estimated $1 trillion annually due to the costs of incarceration, reduced earnings, and increased health costs once children reach adulthood. As the New York Times had it, the $15 minimum wage truly saves lives.

Indeed, this increase is sorely needed. Currently, child-care workers’ salaries are abysmal: Most early childhood teachers earn around $11 per hour, with pay variances for roles, qualifications, and location. More than half of child-care workers rely on public assistance.

And yet, despite workers’ low pay, labor costs remain one of the highest costs to child-care providers, at around 65 percent of operational costs. This muddies the minimum wage conversation in the child-care arena, and in some ways even puts working parents and their children at odds with providers. Labor costs can’t be offset by measures that other industries might take to absorb the impact of the minimum wage increase, like streamlining technology or hiring fewer workers. That’s because child-care centers require trained, human educators who are physically present, as well as low staff-to-child ratios to maintain safety and quality.

Costs to families are already burdensome. The average family pays around $9,000-9,600 annually for child care. Though the Department of Health and Human Services recommends that families pay no more than 7 percent of their income to child care, in 41 states and D.C., center-based care for an infant exceeds 10 percent of the median income for a married couple. For single-parent families, costs may exceed 40 percent of a parent’s average earnings. In the northeastern, midwestern, and southern parts of the country, child care costs more than a mortgage, and substantially more than college tuition.

All of which speaks to an important question: Who will—or should—shoulder the much-needed pay raise to child-care staff?

Ironically, teachers may bear some brunt of their own pay increases via cuts to compensated hours and benefits, which are already severely lacking. In Washington state, 44 percent of child-care providers surveyed said that they’d reduce hours and staff benefits to balance the state’s minimum wage increase (see graph below). Raising entry-level minimum wages without raising compensation comparably for more qualified staff is likely to fuel problems related to wage compression. This, in turn, could make it harder to recruit and retain experienced, credentialed staff. 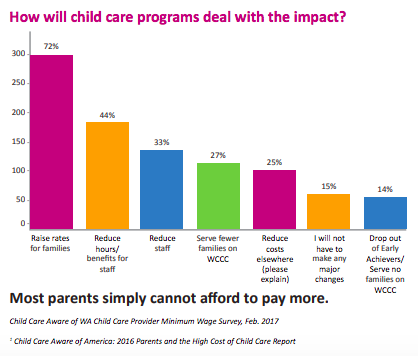 When minimum wage laws increase staff pay, providers will be faced with arduous decisions. For instance, since home child-care providers aren’t considered employees, they may cut their own earnings below $15 per hour to accommodate other employees’ wage increases. If child-care subsidy rates aren’t increased, providers may also elect to serve fewer low-income families, or they may charge those families more to offset the increased costs. Meanwhile, small business owners providing access to child care in their communities may struggle to stay open as their labor costs balloon.

In addition, as in most industries, costs will presumably be passed along to consumers. Families’ fees will likely increase, potentially causing loss of access to quality options or to child care altogether. Families earning minimum wage may lose access to subsidies as their pay incrementally increases, since many income ceilings to qualify for subsidies were established prior to minimum wage-increase laws and haven’t been adjusted for inflation.

For instance, in 2017, California’s income limit to qualify for child-care subsidies was $42,216 or less for a family of three. A couple working full-time and earning minimum wage in the state would make $43,680 and no longer qualify for child-care subsidies. A Los Angeles Times article describes May Martinez and her family, who will now have to pay the full rate for child care at $2,400 per month rather than the subsidized rate of $167 per month—because her husband earns just $4 more hourly.

What is there to do about this? States and localities ought to translate the vision of livable wages laid forth by voters into a reality where low-income families will receive and benefit from the higher wages they’ve been promised. The aforementioned scenario is called the cliff effect, which describes how pay increases and employment changes often result in penalties like swift subsidy removal. Colorado, however, is one state that has softened the cliff into a slope by creating the Child Care Assistance Cliff Effect Pilot Program, which slowly phases out the amount of public assistance for families above the subsidy threshold.

Florida and Maryland have launched similar initiatives to shrink the cliff effect for families in their states. The Child Care Law Center (CCLC) recommends increasing income eligibility ceilings to qualify for subsidies, raising rates for contracted and subsidy-based child care, and expanding funding initiatives and technical assistance to localities. The CCLC also suggests developing task forces in each state to examine the implications of minimum wage increases on child-care availability and affordability.

Child care is an intergenerational solution to poverty. As wages rise, families shouldn’t be forced to sacrifice access to quality child care. Early childhood educators, for their part, deserve earnings that value their contribution to young children’s development and learning, which is undoubtedly higher than minimum wage. These workers shouldn’t be penalized through cuts to hours and benefits as their incomes incrementally elevate. Change is coming; since 2014, minimum wage increases have taken effect in 27 states, D.C., and 41 localities. Still, state and local governments, parents, and providers must anticipate the changes yet to come, and be proactive to prevent unintended consequences that may arise from the best of intentions.