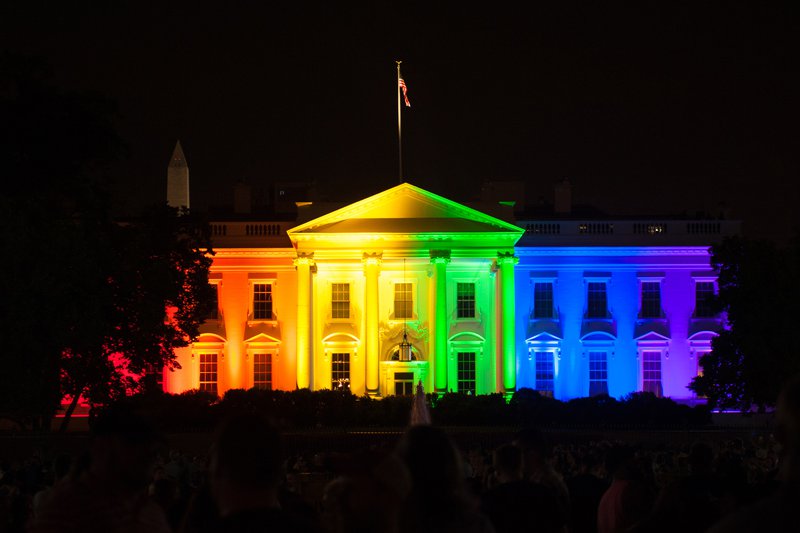 Pride started as a riot. Celebrated every June in the United States and worldwide, Pride Month honors the Stonewall Uprising, the 1969 protests against New York City Police as they raided a mob-owned gay bar. The Stonewall riots built on several other acts of resistance in the years preceding them, including the 1959 Cooper Donuts Riot in LA, the 1964 Picket of the US Army Recruiting Center in New York, and the 1964 Compton’s Cafeteria Riot.

The first Pride marches were held in New York City, Los Angeles, San Francisco, and Chicago in 1970, and by the following year, they’d spread to London, Paris, West Berlin, and cities across the globe. Pride began as an act of resistance and a celebration of identity.

Being out and queer as a symbol of strength would continue to take center stage in the following decades. In the 1980s and ’90s, the AIDS Coalition to Unleash Power (ACT-UP) led grassroots efforts to protest the inaction of the Reagan and Bush administrations to address the AIDS epidemic — denying its victims rights, benefits, and care.

Until nearly the start of the twenty-first century, the American government was committed to building and maintaining a “straight state,” upholding the gender binary through sartorial laws, denying public gathering places to LGBTQIA+ Americans, and promoting far-ranging censorship of publications. In the name of national security, LGBTQIA+ Americans were targeted and expelled from within its ranks, making their safety and citizenship conditional.

Many of the first waves of LGBTQIA+ rights activists were veterans of World War II, Vietnam, and Korea. In 1975, Vietnam veteran and Technical Sergeant Leonard Matlovich made history by handing his superior officer, a Black captain, a coming-out letter and saying, “It means Brown v. Board of Education.” In doing so, T/Sgt. Matlovich became the subject of a court case to challenge the military’s ban on gay and lesbian service members.

The work of activists before us and the work still to be done — as highlighted by the recently repealed trans service ban and discussions surrounding the pardon of Chelsea Manning — inspired the creation of Out in National Security (ONS), a community of LGBTQIA+ activists and national security practitioners seeking to create equal access and opportunity.

Despite the vast number of LGBTQIA+ individuals employed by the Pentagon, there is both a lack of LGBTQIA+ representation at the decision-making table in national security spaces and a clear lack of understanding among traditional gay advocacy of the needs of queer national security professionals. ONS was created to fill both gaps, by building a space that connected the LGBTQIA+ community in the field and empowering them to work together to accelerate their careers through professional development, affect laws and policies, and recruit, retain, and promote LGBTQIA+ Americans across the national security sphere.

For years since our founding, we’ve partnered with New America to highlight leaders and emerging voices from across the queer community. This partnership has continued to combat homophobia in the field, increase visibility, and allow many more to see themselves represented.

The fields of national security and foreign policy are very white male-dominated. A lack of diverse or queer representation in reading lists across subjects like military history, business, or foreign policy do little to challenge this. Without more inclusive narratives, generations of Americans — both in the security sector and more broadly — fail to learn how marginalized communities contribute to and serve this country, which only further perpetuates racism, homophobia, and misogyny.

But there are plenty of great reads that honor and amplify the experiences of LGBTQIA+ Americans working to advance peace and security at home and abroad. Whether you’re interested in sprawling histories, short story collections, or intimate memoirs, the books listed below offer a starting point to explore what it means to be out in national security — both in the past and present. In honor of Pride Month, this list aims to spark curiosity and help fill gaps in your knowledge about the unique history and experiences of the queer community in national security and foreign policy. Happy Pride and happy reading!

Celebrating the 2022 LGBTQIA+ Out in National Security Leadership and New Voices List (Political Reform, 2022): As inclusion, diversity, equity, and access have made their way to public service and national security, we discuss being out in national security and an appreciation for those that are in 2022.

National Security & Foreign Policy LGBTQIA+ 2021 Out Leaders List (Political Reform, 2021): We applaud the work our national security enterprise is doing to build on LGBTQIA+ presence and voices in our own institutions, and to advance LGBTQIA+ rights here and abroad — and we honor 40 queer experts in U.S. national security.