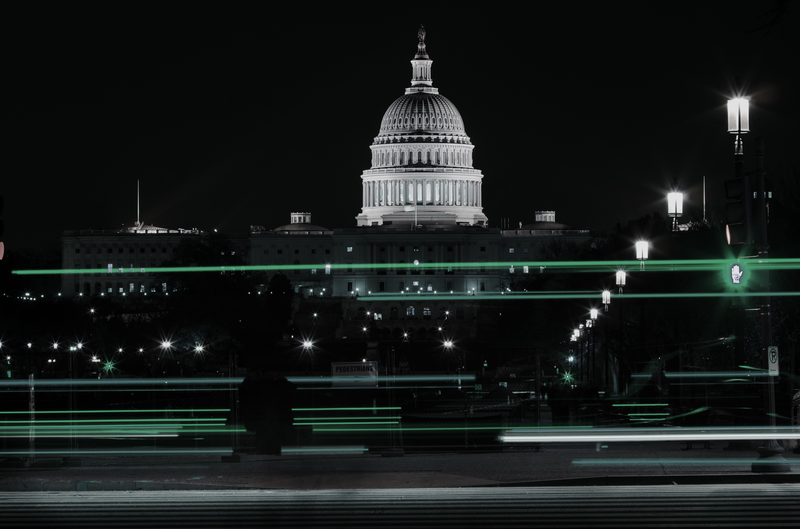 If the future of American democracy feels uncertain, that’s because it is. So, what will the rest of the decade look like? It’s always hard to make predictions, especially about our uncertain future, but there are three potential scenarios: breakdown, muddle, and transformation. By understanding how and why each scenario could come about, my hope is that we can collectively steer away from breakdown and towards transformation.

It is not hard to think about how the breakdown of the government could come, given all the overheated rhetoric about the 2024 election, and the ways in which the “Big Lie” has galvanized many far-right activists into seeking office themselves or pushing their elected representatives to buy into their far-fetched theories and change the voting rules. A disputed 2024 election almost feels like a foregone conclusion at this point, and it is increasingly difficult to imagine that the losing side concedes peacefully. The question is: then what?

Imagine a narrow Trump win, and Republican control of Congress. Democratic protests grow in states Trump narrowly won. Right-wing counter-protestors show up, and street fighting grows. Democratic protests mount after Trump is inaugurated. Now Trump has the powers of the presidency at his disposal. He can mobilize federal resources and declare a state of emergency. He could have the justifications he needs to establish an authoritarian state.

Or, alternatively, imagine a narrow Biden win. Republicans in Congress object. Protests grow. Does Biden send in the troops? Does he crack down on inciters and limit civil liberties? Do Republican states begin to mount a secession campaign?

Or imagine the election winds up in the courts with no clear winner. How does it get resolved? What happens when militia groups are spoiling for a fight?

One could spin out more scenarios here, but they would all have three important things in common. First, the losing side refuses to accept the loss, because they are convinced the other side cheated. Second, rather than go quietly, they engage in political violence. And third, violence is met with violence and the force of a federal crackdown, which pushes into authoritarianism.

The specifics of how it happens may vary, but once an escalating spiral of violence begins, it may be very hard to stop. Additionally, states dominated by partisans on the losing side may begin agitating for secession, contributing to even more escalation.

The “Muddle” scenario differs from the “Breakdown” scenario in that we avoid a spiral of violence. Perhaps there is some violence, but it mostly calms down. If Trump wins, and Republicans take charge, they struggle to govern coherently. As with the previous Trump administration, they are bogged down by their own incompetencies and petty in-fighting. And because much of the federal government can run on auto-pilot and benign neglect, it continues to do so, though with increasing incoherence and inefficiency.

Meanwhile, policy innovation continues to happen at the state and local level. Fights between levels of government continue to amplify (think about the fights between cities and states and the federal government over masking and vaccination policies, for example), leaving the courts overwhelmed and divided. Despite the authoritarian intentions of Trump and his acolytes, they can only do so much damage, given the many overlapping lines of authority in the layered U.S. system, and the reality that narrow majorities always struggle to govern.

Eventually, Democrats come back into power nationally, and fight the same struggles in steering the rudderless ship of state as it is pulled in all directions.

Or Democrats maintain control after the 2024 election. Maybe Democrats even get unified control of Congress, and Biden makes bold promises again for his second term. But again, he is stymied by fights within his own party, and the difficulties of getting anything done in Washington.

Either way, what distinguishes the muddle from the breakdown is that despite grudging and grumbling, protests do not escalate into widespread violence. Perhaps this is because much of the heated rhetoric around violence is simply rhetoric, or because activists believe they are better off trying to win the next election and don’t wish to risk their lives or winding up in jail. As long as they can still hold their jobs or get their retirement checks, perhaps it is simply easier (and more fun) to complain all the time than to do anything about it. Or perhaps, and more likely, political leaders do not call for violence, and in fact condemn it.

The muddle best describes our current moment, at least for now.

The optimistic scenario is “Transformation.” In this scenario, the zero-sum partisan death match between Democrats and Republicans breaks down, and American politics enters a new alignment. Under this alignment, participation and inclusion expand, and the promise of multiracial, multiethnic democracy is fully realized.

How could such a transformation happen? First, it happens because a younger generation demands it. Though many of today’s political leaders are in their 70’s and 80’s, they will not be in charge forever. A new generation is now entering politics, and their expectations and demands are very different. They are not attached to the old structures, and are willing to create something new.

To make our system of self-governance more representative and more responsive, a new generation of actors could reform our political institutions by shifting to multi-member proportional districts for the House, allowing more parties to compete nationally. At state and local levels, reformers could explore even bolder forms of statewide, proportional representation to allow more parties to form. Almost certainly, a successful transformation to a multiracial, multiethnic democracy will require more than two political parties, which will allow us to break the two-party doom loop of hyper-partisan polarization that is threatening our democracy.

Periods of transformations have all taken place at moments of generational change, in which the realities of governing fell well short of the moral expectations of a rising generation. They took place in response to profound failures of existing government regimes. And this is still certainly true today.

Transformation requires the most work. It can only come about when we stop pretending the status quo is salvageable, and reconcile ourselves to the reality that something will need to change, and that those who build the social movements will get to build the future.

In many ways, transformation is the most American of all the three scenarios. The history of American democracy is a story of multiple transformations. Over the course of our history, we’ve renegotiated and recreated the basic agreements of our political system. We began with an overthrow of the British crown and political independence. In the Progressive Era, we expanded the participatory nature of our democracy, introducing direct election of senators, direct primary, initiative and referendum, and eventually women’s suffrage. In the Civil Rights Era, we expanded voting rights tremendously and then renegotiated ethics and transparency in a burst of good government activism that followed. We are due for another moment of transformation.

However, just like in history, the breakdown and the transformation scenarios may be linked. Unfortunately, it may take a breakdown of the existing order for a true transformation to occur. By contrast, the muddle scenario may offer just enough hope of resolution and enough occasional moments of forward progress, to sap the energy for transformational change.

This is not to say that we should hope for the breakdown scenario, given the human costs it will impose on our society, especially the most vulnerable amongst us. And there’s no guarantee that it will lead to transformation, but just continued breakdown.

Obviously, prediction is folly. But there is value in it nonetheless. By engaging our minds with possible futures, we must put specific details together and imagine how actions might concatenate. To the extent those details and concatenations feel plausible, they can guide our actions.

Democracy in Crisis, part 2: The two-party problem (Political Reform, 2022): Should we be worried about the future of democracy? In the second of this two-part series for Vox, Lee Drutman joins to discuss the history of the two-party system in American politics, polarization, and the future of American democracy.

Violence-Proofing U.S. Democracy: Immediate Priorities for Philanthropy (Political Reform, 2021): The successful renovation of America’s democracy must address strategies that will reverse polarization and mitigate political violence. But efforts of democratic renewal can bring more violence as a predictable side effect. Here are six funding strategies for violence prevention based on various polarizing trends.

Strategic Foresight in the U.S. Agencies (International Security, 2021): For the federal government, imagining alternative futures could mean the United States having the tools to manage the crises of tomorrow. Should anticipatory thinking and strategic foresight be better implemented — and prioritized — by policymakers to set up present, successful strategies and cope with future uncertainties?