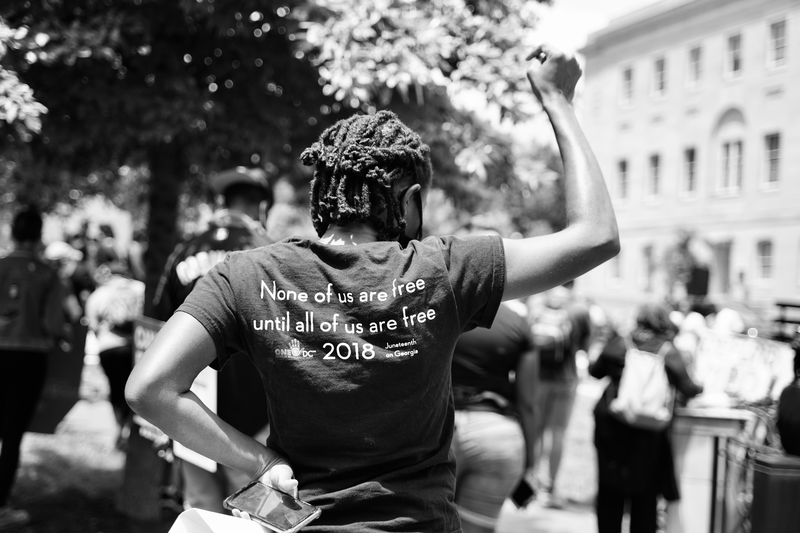 On June 19, 1865, the enslaved African Americans of Galveston, Texas, became the “last in the South that freedom touched.” Union troops made their way into town that day to enforce the Emancipation Proclamation that was issued a full two and half years earlier.

More than 150 years later, Juneteenth has been declared a federal holiday to commemorate the day that news of the end of chattel slavery reached the final Confederate stronghold in the United States. While many Black Americans have celebrated this occasion for decades, in the wake of mass protests over police brutality and racial inequity, it has felt like the rest of the country “Columbused” the holiday, discovering this day of freedom for the first time.

Juneteenth’s celebration was a time for Black families to gather and pray, “reassuring each other.” The celebration over the years continued to grow in popularity, reaching new heights in 1872 when a group in Houston purchased 10 acres of land to create Emancipation Park. Today, most celebrations take place among friends and families, but places like Atlanta and Washington, D.C., hold larger events, like music festivals and local parades. While this was a long-standing tradition for many Black Americans, after the 2020 “summer of racial reckoning” — which came with both real and performative transformation — many Americans were introduced to Juneteenth as Biden signed a bill codifying it as a federal holiday.

A year after Juneteenth was made a federal holiday, we’ve seen great amounts of change — some for better, some for worse. Naming Juneteenth as an official federal holiday offered a symbol of hope, but for many Black Americans that hope was fleeting. Pledges by well-meaning people and corporations to learn from the moment of racial reckoning faded as the patterns of police brutality, political violence, and relentless attacks on civil rights ramped up. Doing the symbolic and once “easy” thing, such as creating a federal holiday, has become extremely difficult, while the most consequential thing, like preserving our civil rights and dismantling systemic oppression, has felt impossible.

Black people are still more likely to be murdered by police than other groups — and although Black Americans make up only 13 percent of the population, in 2021, we account for 27 percent of those who have been fatally shot and killed at the hands of the police. Across the country, white nationalist and white supremacist activity is on the rise. The recent mass shooting in a Top’s grocery store in Buffalo, N.Y. highlights the extreme actions against Black people in the name of white supremacy. The battle against critical race theory, a conflict created by a conservative activist for the distinct purpose of turning it into a political weapon, also underscores the fragility of white supremacy, its exclusionary nature, and its hold on this country.

The only shining light during this moment of reckoning was the sense that the country as a whole was taking a look at itself and confronting the racism that permeates our society and our systems — where, without irony, some conservatives see this reckoning as “fighting America itself”: Racism is so deeply embedded in our culture and government that our “American values” include racism at their very core.

So after decades-long efforts, when the House voted with great plurality to make Juneteenth the first new federal holiday since 1983, we saw progress. And while we have seen a surge in awareness and efforts to better understand the experiences of marginalized communities and, in turn, create the spaces necessary to address the racial inequities in America, we’ve also seen corporations hide behind the clenched fist of Black Power and the black, red, green, and yellow flag — freedom washing.

Many corporations are already weaponizing Juneteenth for profit. But for whose benefit? In the case of Wal-mart, with their Juneteenth ice cream, and many other companies, it isn’t Black Americans. This year, a celebration of Black life is now being white-washed, leaving many with mixed feelings. The commercialization of the holiday shows us that the worst racial inequalities are not ancient history, they’re our current reality: America for its entirety has profited off of our pain and struggle, and now they have another way of profiting off of our joy. 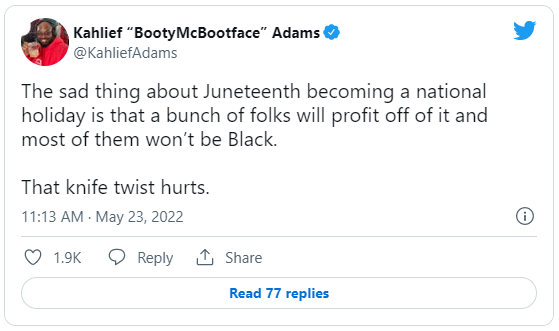 In 2020, when New America committed to a major three-year racial equity transformation initiative in the wake of the murder of George Floyd, there was a healthy and warranted amount of skepticism from staff, particularly Black staff and other staff of color. Understanding this, our leadership made it clear that this institutional transformation would not be a fleeting moment filled with empty platitudes, symbolic nothingness, and box-checking. Without resources, time, or staff buy-in, they knew that this move to better reflect the communities we live and work in and ground our organizational culture and work in equity, particularly racial equity, would not be possible.

In 2020, we set out on our equity transformation journey together by building and revising a roadmap for our work. We spent most of 2021 building a shared vocabulary through monthly organization-wide workshops. Each program and department across New America was tasked with identifying the ways equity does (or does not) show up in their work so that we could set a baseline and begin to measure our growth and impact. All managers attended inclusive leadership development and management training. Our operations teams revamped the compensation policy with equity and transparency at the center of their efforts and began to build out a more inclusive career-pathing framework. We even had a week-long Juneteenth Spotlight series where our then-new President and Chief Transformation Officer Paul Butler highlighted “voices and organizations challeng[ing] assumptions about Black people and communities.” The series serendipitously ended on the day Juneteenth became a federal holiday.

In the two years since that commitment was made, we’ve accomplished a lot, but the work remains hard and we continue to struggle with issues that are not unique to us. How do you meet each staff person where they are when each person is at a different point in their equity journey? What does “building equity into the work” look like when inequities and microaggressions continue to exist within teams? What does accountability look like across the board? How do you find time for this individual learning/unlearning and organizational change when you’re already spread thin balancing a wild workload and life during a pandemic? Where is the line between leaning into our learning edges and doing real harm to our most marginalized staff? This last question is one we continue to return to over and over again.

The commercialization (and “Pride-ification”) of Juneteenth was inevitable, even expected. But just as Pride began as a riot and is more than an aisle of rainbow merchandise, Juneteeth will continue to be a reflection of this country, its continued struggle, and the joy Black folks make for themselves in spite of “it’s the freedom for me” knickknacks. What does Juneteenth compel you to do beyond consumerism, remembrance, or celebration? For New America, it reminds us that activities like a day off of work without the proper historical context and education do just as much as a commemorative novelty ice cream flavor. There’s work still needed to be done both in our country and in our organization to ensure racial equity and justice for all.

The Work Within: Racial Equity Transformation at New America (Calamity as Catalyst, 2021): It's a fact that the think tank sector is not very diverse. Here's how New America is working to live up to our highest, most equitable ideals not only within our culture and policies, but also the policy work that we do.

Transforming New America for the new America (The Thread, 2022): CTO and President Paul Butler discusses the ideals for a new America, and New America’s strategic transformation as it continues to move towards the ideal of a more equitable, multicultural United States.

Dialing Up the Volume on Economic and Racial Justice Efforts During the Pandemic (Calamity as Catalyst, 2021): Two moms, friends, and colleagues share how the pandemic, and the renewed calls for racial justice, transformed the way we should think about community engagement.