Care is Infrastructure and We Must Compensate Caregivers Accordingly 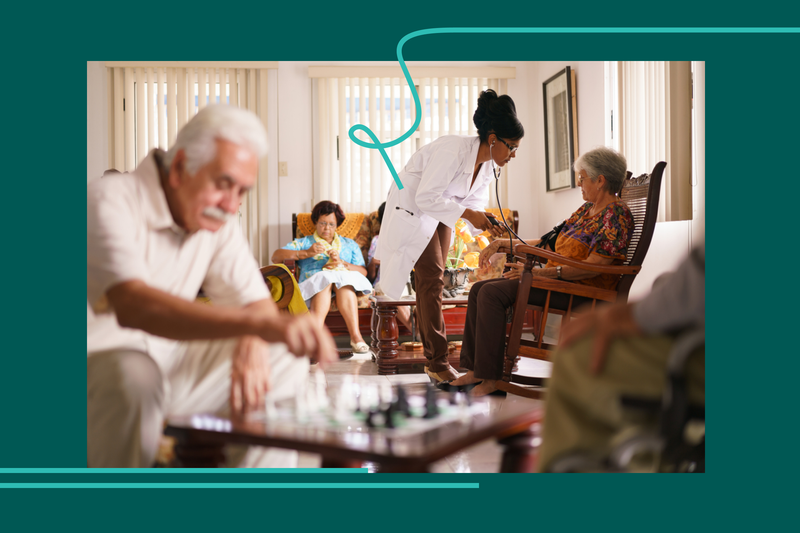 In 2012 I interviewed a young Black father in Columbus, Ohio as part of a study of long-term unemployment. Donald* had been out of work since his aunt’s restaurant closed its doors as a result of the Great Recession. No longer able to make rent, he moved in with his mom, who had kidney disease, and became her full-time caretaker. Back then, just as they do now, low-income families like his faced a precarious economy and a “care crisis”— a phrase that at its simplest means a mismatch between a population’s care needs and its available care resources.

Donald was proud of his caregiving role. His mom had raised him and his siblings on her own, while battling a chronic illness. Now he saw his turn to step up for her. “My mom’s a trooper,” he told me, “and we be troopin’ with her.”

Even while caring for his mom and sharing custody of his daughter with his ex-girlfriend, Donald was enrolled in a training course to get his GED and become a certified truck driver. I asked him who would care for his mom when he started work. His sister, currently finishing school and working part-time, would step back up, he said, and their aunt, and the same family members who helped out now would help in different ways, when he went on the road. It was more important that he be working. After all, Donald asked me, “What would you rather be doing than making money?”

This was not a man who devalued care — he took pride in it — but his caregiving didn’t pay. Making money was paramount to putting him in a position where he was truly, as he put it to me, “able to take care of something” for his family, should trouble arise.

I’ve thought about my conversation with Donald throughout the COVID-19 crisis, particularly as so many thinkers, activists, policymakers and even President Joe Biden have made the case that caregiving is essential economic infrastructure. But Donald could see a financially stable future for his family in one kind of infrastructure work, truck driving, and not in the work of providing long-term care to his mom. I’ve interviewed countless men and women during the pandemic who are taking on care responsibilities like never before. And by and large, they agree: care work matters. Yet many caregivers have one foot out the door. That’s because, despite what our society may have said during the pandemic about valuing family caregiving or essential caregivers, care work doesn’t pay.

For centuries, the United States has relied on unpaid and low-paid caregivers. Millions of caregivers live in poverty or on the knife’s edge of it, while their labor allows millions of others to make money without sacrificing the well-being of their own families. Though demand for home health aides has skyrocketed due to an aging population, they make an average of just $11 per hour. Child care workers too earn less than $11 per hour, with 53 percent of these workers living in households that must utilize public income supports to get by. Black women earn less than their white counterparts even in these industries they dominate.

Despite what our society may have said during the pandemic about valuing family caregiving or essential caregivers, care work doesn’t pay.

Our country’s structures for provisioning care have both preyed on and perpetuated systemic inequalities, like racism, sexism, and the hard national inequalities of borders and immigration policy. Women of color make up a disproportionately large share of both child care and early educators and home care aides. Researchers like Rhacel Salazar Parreñas and Pierette Hondagneu-Sotelo have shown that women in the Global South have few options but to immigrate to the Global North to become low-wage caregivers, thus leaving their own families behind. The sociologist Arlie Hochschild has called this shifting of care resources from poor countries to wealthy countries as a “care drain.”

Care workers have called attention to these unjust dynamics, to their low wages, and what it means for a country to rely on those most desperate for such intimate and often emotionally delicate work. Yet unlike workers in other sectors, when these workers organize, they’re not protected at the federal level.

U.S. care infrastructure has been pieced together by the messy, dangerous, and exhausting work of drastically under-compensated people. Like Donald, they often have little other choice but to become caregivers, and face immense material incentives to leave caregiving as soon as they can. We’ve accomplished care to this point through reliance on gender and racial conditioning, through the threat of eviction or disqualification from public benefits, and sometimes, as in this country’s first centuries, through outright enslavement. In Forced to Care: Coercion and Caregiving in America, anthropologist Evelyn Nakano Glenn provides countless examples from our contemporary moment of members of marginalized groups and low-income communities becoming carers out of necessity, then escaping it as soon as their fortunes had changed.

This time around, in the face of crisis, the political moment, the fallout of the pandemic for parents, the advancement of the care movement in the last decade, we’re having a national reckoning with something caregivers always knew: care and the caregiving infrastructure are essential to a functioning economy. And if that infrastructure isn’t strong, it will collapse in the face of crisis, taking the more traditional measures of economic well being down with it. That ripple effect seems to have finally drawn the attention of large employers, politicians, and majorities of Americans on both sides of the political aisle.

In the aftermath of the pandemic, President Biden has named building care infrastructure as a major first-term priority, and COVID-19 relief bills already passed have targeted the child care industry, parents, and home health workers with assistance and long-term relief. But care’s moment in the spotlight is far from finished until we invest public money and empower caregivers as though the lives of care workers are as valuable as their work.

I’m often in groups where we grapple over the question of how to raise the value of care. The truth is, most Americans, men included, do value care. It’s our society — from our economic structures to our public policies and our workplaces — that doesn’t value care or treat it as the essential infrastructure of life that it is. Already, opponents of the Biden administration’s ambitious care-infrastructure proposals are decrying the high price tag of these long-needed investments, and creating false dilemmas such as parents deciding between child care or more cash.

We can’t afford to spend the aftermath of this crisis building up care infrastructure only insofar as it gets us back to business as usual. For unpaid and low-paid caregivers, business as usual is grueling, disempowering, and often impoverishing. In the pandemic, it has been life-threatening. More of us than ever before agree that care has value. The question now is whether we’re willing to pay for it.

*Names were changed during the research study to protect participants’ privacy.

A Bold Policy Agenda for Work-Family Justice and Gender Equity During COVID-19 and Beyond (Better Life Lab): We offer our ideas for policy movers-and-shakers drawn from the lives of people contending with a public health crisis and a financial downturn in the midst of the pandemic.

Building Back Better: A Jobs-Centered Infrastructure Plan (Education Policy): This brief looks at strategies to support recovery through creation and investment in infrastructure jobs.