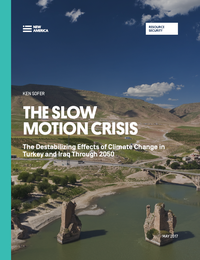 Based on existing patterns and future scientific projections through 2050, Turkey and Iraq are both expected to see higher temperatures, decreasing precipitation, and more frequent drought. When combined with the projected increase in global food prices and demographic changes in each country over the next three decades, food insecurity is likely to increase in both countries, while rural farm incomes are likely to either decline or become more volatile. What is still unclear is whether these climatic and social changes will undermine the stability and security of Iraq and Turkey.

The relationship between climate change and security has received greater policy attention in recent years, spurred in part by the Paris climate agreement and the Syrian civil war, but the relationship remains misunderstood and frequently mischaracterized. A changing climate does not directly cause violence, terrorism, or conflict, but it does affect our water resources, our food production, and our economic productivity in ways that put greater stress on the communities we live in and greater pressure on our governing bodies. A growing body of research shows that for weak and fragile states already struggling to care for and protect their citizens, the additional stress created by climate change can turn a tenuous peace violent.

Instead of looking at each of these climatic effects separately or making a generalized statement about the climate-security relationship, we can learn more about the causal impact of climate change on instability and security by comparing the two closely-tied, but different case studies of Turkey and Iraq. Between now and 2050, the border region connecting Turkey and Iraq will experience similar temperature increases and precipitation decreases, but because of the different political, social, economic, and security dynamics on each side of the border, these changes to the climate will have vastly different implications for each country.

Whether Turkey and Iraq are made less stable and more violent by the long-run effects of climate change will depend on how both countries manage their ongoing governance and security challenges, whether their economies transition away from agricultural production, and what policies central and local governments take. Preventing the worst impacts of climate change on Turkish and Iraqi stability will require investing in more country-specific research, improving management of the river system, incorporating Kurdish communities into adaptation measures, and increasing urban food security.

For these two populous, strategically important countries, the next few decades will test whether they will be able to manage and adapt to the challenges of a changing climate or whether these changes will overwhelm the capacity of local and national leaders.