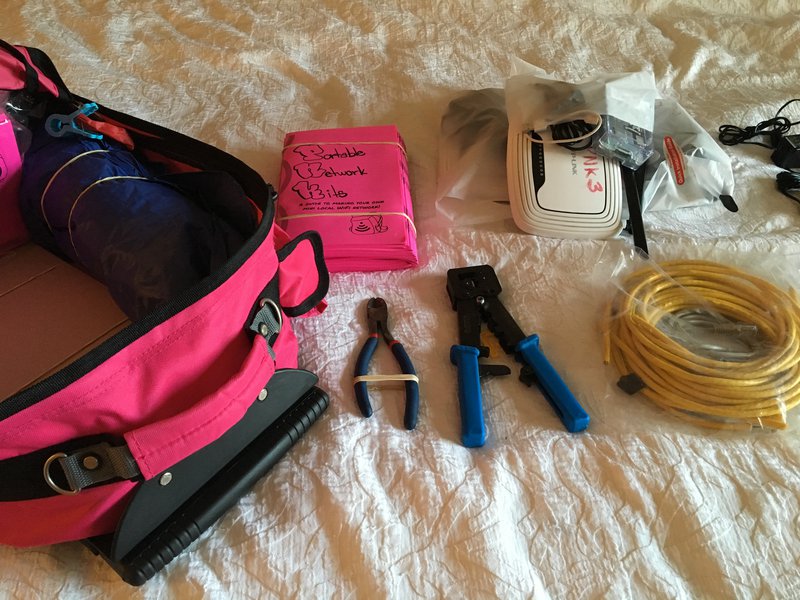 Imagine: A storm has just hit, and everyone has been evacuated to a converted, temporary emergency-storm-shelter-hurricane-evacuation-safety-zone-medical-assistance-center-soup- kitchen. Two people, one a single parent looking for their child, and another, looking for their teacup Yorkie named Madex. There is no cell service or WiFi in the building. What will they do?

This past weekend, on June 17th, at the Allied Media Conference in Detroit, MI, New America’s Resilient Communities team members Raul and Katherine answered this question in a workshop on how to make your own Portable Network Kit (PNK). Participants in the hands-on session played around configured a wireless router and a Raspberry Pi in order to create a local pop-up network in a pinch.

Without an introduction, we jumped into the session by recruiting two volunteers to wear blue rain ponchos and read from a script titled “Bad Theatre / WiFi in a Bag”. In this admittedly corny skit,  two people are stranded in an emergency shelter without cell phone service or WiFi. The skit ends with them both crying out in unison: "Argh! Why isn’t there at least a shared chat app we could use on a free pop-up local WiFi network?! Who can help us?!" which was our cue to strut in pulling a garish pink backpack, accompanied by cheesy music, to present our PNK.

After the local network was set up, we invited the audience to log on and make use of the Etherpad application hosted on the Raspberry Pi local server. We then answered questions and discussed details on the various types of PNKs. Yamil Lora, from The Point in Hunts Point, addressed the audience and gave some examples of how his community would use PNKs during an emergency. Next, we broke the audience up into three groups and each was given a PNK to put together and use. Tinkering with the equipment and troubleshooting was encouraged.

We ended the session with each group listing the various ways they envision using a PNK. We answered more questions on how they would implement in their local contexts and then invited the audience to write what they liked/would change about the workshop on post-it notes. In the end, we were sure that the participants walked away with the following understandings:

We were happy to see that the audience was truly excited by the opening skit, the zine we handed out, and the hands-on time with the PNK equipment. We also appreciated the continued conversation of the subject around the campus, as participants would stop us to ask even more questions about how these PNKs can help their communities. Overall it was a very successful session.