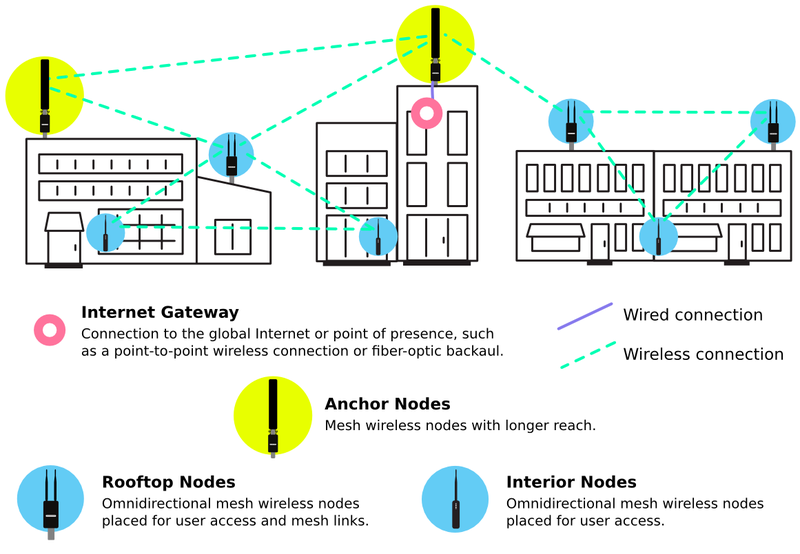 The project focuses first on creating reliable connections among neighborhood anchors located in flood zones. Local trainees will install networked hotspots first at local small business sites, which will allow the businesses both to draw foot traffic day-to-day and to keep them in communication in the case of future floods or other emergencies. Later phases of the work will add interconnection with network hubs at neighborhood anchor institutions and develop locally-tailored applications on the networks, such as neighborhood radio, events programming, and local business services as well as preparedness features.

Local residents trained as Digital Stewards will design, organize, and build the networks and serve as the primary points of contact for participating businesses. These Stewards will be trained by our six neighborhood community partners with support from New America and NYC-based wireless engineering firm Sky-Packets. In the course of their work on the networks, they will develop and practice organizing and technical skills -- from tech hardware, software, and network design to outreach, planning, and relationship management.

This initiative addresses the interrelated issues increasingly facing many communities, including the impact of climate change, limited technology access and ownership, and a need for increased training and employment opportunities. After Sandy, many New York neighborhoods forged new alliances or built relationships in a spirit of collaboration and mutual support. Resilient Networks for RISE : NYC seeks to build upon that spirit by adding infrastructure assets to increase preparedness and deepen community ties.

Resilient Networks for RISE : NYC is funded by the New York City Economic Development Corporation (NYCEDC). New America was one of eleven winners of RISE : NYC, a NYCEDC competition for new technologies and solutions to protect New York City from the impact of future storms, sea level rise, and other effects of climate change. The competition was an initiative of the City of New York and is funded by the $4.21 billion allocated by the U.S. Department of Housing and Urban Development to the City of New York in federal Community Development Block Grants – Disaster Recovery (CDBG-DR). NYCEDC is the City’s primary engine for economic development, charged with leveraging the City’s assets to drive growth, create jobs, and improve quality of life.