Spreading the Gospel of Climate Change 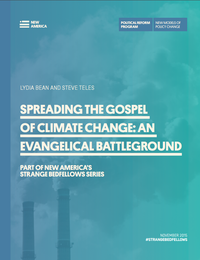 Today, New America’s Political Reform Program released the third in a series of papers from the New Models of Policy Change Project examining how “strange bedfellows” coalition building is shaking up policymaking across the country. In “Spreading the Gospel of Climate Change: An Evangelical Battleground” authors Lydia Bean and Steve Teles examined the 2009-10 effort to leverage evangelical Christians to pass climate change legislation, why it failed, and what lessons can be learned for future coalition building.

“Anyone who thinks about, fights for, or funds policy change has something to learn from this exploration of how the environmental movement lost its evangelical partners at a crucial moment,” said Heather Hurlburt, director of the New Models of Policy Change project.

In analyzing the “Creation Care” movement, the authors cite considerations for future transpartisan coalitions, such as determining how entrenched issues are; whether there is a significant, mobilized base; and whether all partners and donors truly understand one another.

The report forms part of the Strange Bedfellows paper series, led by the New Models of Policy Change Project in New America’s Political Reform Program. The series examines how new policy ideas emerge from unlikely corners of the right or left, and find allies on the other side who may come to the same idea from very different worldviews—a “transpartisan” approach. The successes, failures and key figures of this transpartisan approach to policy change will be explored over four case studies in criminal justice reform, Pentagon spending reduction, climate change, and opposition to Common Core education standards.