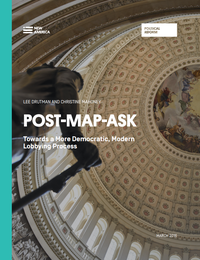 Business power is not a new issue, but the amount of political activity on behalf of large corporations today is truly unprecedented, especially in comparison to the shrinking resources Congress allocates for its own policy staff. The $2.6 billion in reported annual corporate lobbying spending is now more than the $2 billion combined budget for the entire Senate ($860 million) and the entire House ($1.18 billion).

POST-MAP-ASK: Towards a More Democratic, Modern Lobbying Process looks at the ways in which the chaotic legislative lobbying process amplifies the resource imbalances, overwhelms congressional staffers, and influences public policy outcomes. The report makes the case for a process that ensures more accountability, more transparency, and better representation for a more diverse group of citizens.