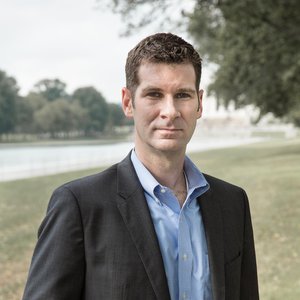 Peter Warren Singer is Strategist and Senior Fellow at New America. He has been named by the Smithsonian as one of the nation’s 100 leading innovators, by Defense News as one of the 100 most influential people in defense issues, by Foreign Policy to their Top 100 Global Thinkers List, and as an official “Mad Scientist” for the U.S. Army’s Training and Doctrine Command. Peter is the author of multiple best-selling, award winning books. His non-fiction books include Corporate Warriors: The Rise of the Privatized Military Industry, Children at War, Wired for War: The Robotics Revolution and Conflict in the 21st Century; Cybersecurity and Cyberwar: What Everyone Needs to Know and most recently LikeWar, which explores how social media has changed war and politics. It was named an Amazon and Foreign Affairs book of the year and reviewed by Booklist as “LikeWar should be required reading for everyone living in a democracy and all who aspire to.” He is also the co-author of a novel type of novel, using the format of a technothriller to communicate nonfiction research. His first Ghost Fleet: A Novel of the Next World War which was both a top summer read and joined the professional reading list of every branch of the US military, leading to briefings everywhere from the White House to the Pentagon. His latest is Burn-In: A Novel of the Real Robotic Revolution (May 2020). It has been described by the creator of Lost and Watchmen as “A visionary new form of storytelling—a rollercoaster ride of science fiction blended with science fact,” and by the head of Army Cyber Command as “I loved Burn-In so much that I’ve already read it twice.”