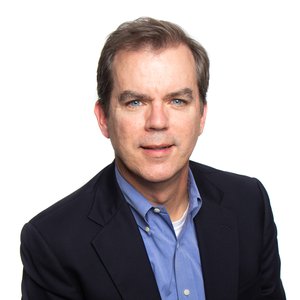 Fuzz Hogan formerly managed the editorial and production units, including oversight of our editorial efforts, our multimedia production, our website, and social media. In that role, he was responsible for how we inform and engage audiences in D.C. and beyond, overseeing how New America creates and curates widely syndicated content to support the policy goals of the programs, to support the New America brand as a civic enterprise with "journalism in its DNA." Hogan was a member of the Leadership Team.

Before joining New America, Hogan served as executive producer at Planet Forward, a media project of the Center for Innovative Media at the George Washington University, which focused on finding and curating innovative ideas in energy and sustainability. While at Planet Forward, he served as executive producer of a PBS one-hour special in April 2012. Previously, he served as director of communications for the education advocacy organization, Advance Illinois. Before that, he spent nearly 20 years at CNN. His last job was Midwest Bureau Chief, responsible for coordinating CNN coverage from the network’s bureaus in Chicago and Dallas, as well as coverage in the 14-state region. Previously, he served as the director of coverage for CNN/U.S., responsible for the oversight of the network’s national desk and newsgathering. In 2002, he was co-Executive Producer of CNN’s “Terror on Tape” series, which won a Peabody award. He has a bachelor’s degree in English and a master’s degree in Journalism from Northwestern University.