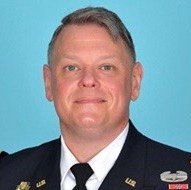 Lieutenant Colonel (LTC) Eric Johnson was a Chief of Staff of the Army Senior Fellow in New America’s International Security Program. A Psychological Operations (PSYOP) Officer by trade, his primary area of research is information warfare.

Johnson enlisted in the Army Infantry in 1989 and was later commissioned as an Armor Officer through the ROTC, Green-to-Gold program, at Austin Peay State University, in Clarksville, Tennessee in 2001.

Johnson holds a M.S. in Defense Analysis, with an Irregular Warfare concentration, from the Naval Postgraduate School in Monterey, California.

Born in Wisconsin, Johnson has been station throughout the United States while in the Army, along with multiple tours to Iraq and Afghanistan, but has spent much of the time in North Carolina.