Towards A Digital Equity Foundation 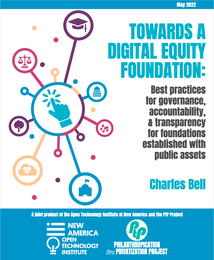 In April 2021, New America’s Open Technology Institute (OTI) and the Philanthropication thru Privatization Project (PtP) released a joint proposal that the federal government should invest a substantial portion of the windfall proceeds from future auctions of public airwaves (spectrum) to seed a new Digital Equity Foundation dedicated to addressing equity gaps in broadband adoption, education, telehealth, access to government services, and other critical areas.

Since that time, momentum for the concept has continued to build. In February, 2022 the concept was endorsed by nine prominent national organizations that joined to launch the Airwaves for Equity initiative: the American Library Association, the Benton Institute for Broadband and Society, Center for Rural Strategies, Common Sense Media, Consumer Reports, National Digital Inclusion Alliance, Open Technology Institute, Public Knowledge and Schools, Health & Libraries Broadband (SHLB) Coalition. As of this writing, a growing coalition of more than 75 additional organizations have endorsed the idea of establishing such a foundation with future spectrum auction revenue.

The next step in realizing this vision is now in the hands of Congress and other federal policymakers, as allocation of spectrum auction proceeds to support the creation of a Digital Equity Foundation requires legislation. Policymakers will also play a critical role in establishing the guidelines for the creation of an initial foundation board and mission. This paper serves to help flesh out the options for how that could be accomplished, drawing on a review of existing foundations created with public and nonprofit assets to identify best practices for how to start a foundation with public, quasi-public, or nonprofit funds.

This paper is structured in five parts. In Part I, we provide a brief overview of the proposed Digital Equity Foundation; in Part II, we examine some key examples of existing U.S. foundations that illustrate the use of public or quasi-public funds to support priority public needs; in Part III, we explore ways the proposed Digital Equity Foundation might be structured and organized to achieve its programmatic goals to advance digital equity and inclusion, while operating with appropriate transparency and public accountability; in Part IV, we consider additional legal considerations that surfaced in a review of foundations previously established under federal legislation; and in Part V we provide a summary of concrete recommendations for the proposed foundation.