Beyond Frustrated: The Sweeping Consumer Harms as a Result of ISP Disputes 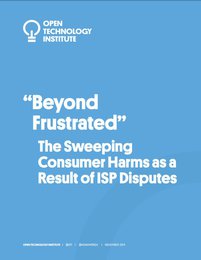 In 2013 and 2014, the policies implemented by some of the nation’s largest communications companies led to significant, months-long degradation of a consumer product for millions of people without explanation or compensation. In this paper, we analyze the full picture of the interconnection disputes described in a recent technical report produced by the Measurement Lab (M-Lab) consortium and describe the widespread, direct consumer harm that resulted. We argue that to avoid repeat offenses, the Federal Communications Commission (FCC) and other policymakers must continue to fully analyze what happened in 2013 and the subsequent actions and implement appropriate policies to remedy the situation. Those policy recommendations should necessarily include transparent, open measurement and oversight of interconnection performance, the groundwork for which M-Lab has already laid.

The paper begins with an introduction and overview of the harms revealed in the M-Lab data, situating those harms in the context of the user experience documented in consumer complaint forums. Part I details the immense scope of those harms — both in terms of the number of users affected, and the significance of the degradation of service many of those users experienced. Part II explains why the resolution of one particular interconnection dispute does not mitigate the need for continued attention from regulators, and ultimately long-term oversight and policy reforms to ensure that it does not occur again.

Part III contains a detailed exploration of the M-Lab data, divided into relevant case studies of both dramatic and incremental degradation. Taken in sum, these case studies present a compelling overview of the challenges that have emerged in the context of interconnection negotiations and recent disputes. Part IV, in turn, details a number of suggested immediate and long-term reforms that the FCC should undertake to ensure that consumers receive the service for which they are paying. The status quo is unacceptable, as is anything similar to a repeat of the dramatic degradation of throughput that occurred in 2013 to early 2014. This paper lays the groundwork for both understanding the problem and addressing it effectively going forward.