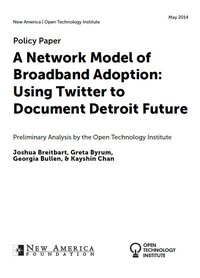 From 2010 to 2012, the Detroit Digital Justice Coalition (DDJC) conducted a federally-funded training program in digital media that they called “Detroit Future.” The purpose of the program was to use broadband adoption as a means of strengthening economic development and community organizing in Detroit. To that end, the DDJC developed a “networked” model of broadband adoption as part of its implementation of the program. The coalition documented the program with the Twitter hashtag #detroitfuture.