The Cost of Connectivity 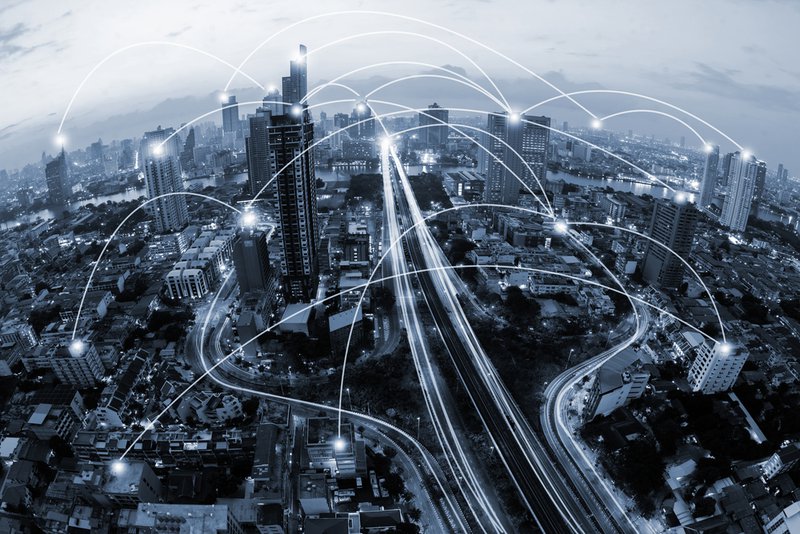 The Cost of Connectivity is a series of three reports published by New America's Open Technology Institute that compare high-speed Internet access in over 20 cities worldwide. These reports provide valuable information about how the United States stacks up with its international peers for the cost and speed of broadband access. These three years of data show that users in the American cities studied are paying higher prices for slower Internet speeds when compared to consumers abroad.

Learn more about each of the studies and find links to the full reports below.

The Cost of Connectivity 2014 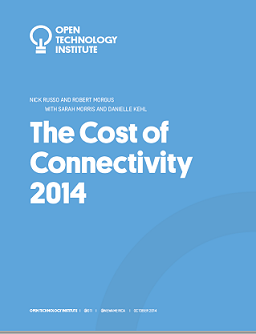 The Cost of Connectivity is an annual report that examines the cost and speed of broadband Internet access in 24 cities in the United States (U.S.) and abroad.

Overall, the data that we have collected in the past three years demonstrates that the majority of U.S. cities surveyed lag behind their international peers, paying more money for slower Internet access. The report presents the 2014 Cost of Connectivity data, which was collected between July and September 2014.

The Cost of Connectivity 2013 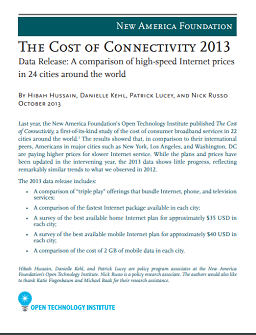 In 2012, the New America Foundation’s Open Technology Institute published The Cost of Connectivity. The results showed that, in comparison to their international peers, Americans in major cities such as New York, Los Angeles, and Washington, DC are paying higher prices for slower Internet service. While the plans and prices have been updated in the intervening year, the 2013 data shows little progress, reflecting remarkably similar trends to what we observed in 2012.

Chattanooga, Tennessee and Hong Kong continue to offer world-leading gigabit speeds, but Seoul and Lafayette, Louisiana also joined the speed leaders, along with Kansas City, Kansas, and Kansas City, Missouri, which were not included in the 2012 report. Meanwhile, in larger U.S. cities, we continue to observe higher prices for slower speeds by comparison. In the U.S., for example, the best deal for a 150 Mbps home broadband connection from cable and phone companies is $130/month, offered by Verizon FiOS. By contrast, the international cities we surveyed offer comparable speeds for less than $80/month, with most coming in at about $50/month. When it comes to mobile broadband, the cheapest price for around 2 GB of data in the U.S. ($30/month from T-Mobile) is twice as much as what users in London pay ($15/month from T-Mobile). It costs more to purchase 2 GB of data in a U.S. city than it does in any of the cities surveyed in Europe.

The new data underscores the extent to which U.S. cities lag behind cities around the world, further emphasizing the need for policy reform. Rather than allowing American cities to fall behind, policymakers should reassess current policy approaches and implement strategies to increase competition, in turn fostering faster speeds and more affordable access.

The Cost of Connectivity 2012 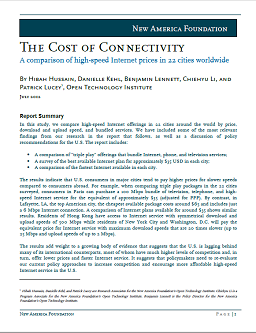 In this study, we compare high-speed Internet offerings in 22 cities around the world by price, download and upload speed, and bundled services. We have included some of the most relevant findings from our research in the report that follows, as well as a discussion of policy recommendations for the U.S. The report includes:

The results indicate that U.S. consumers in major cities tend to pay higher prices for slower speeds compared to consumers abroad. For example, when comparing triple play packages in the 22 cities surveyed, consumers in Paris can purchase a 100 Mbps bundle of television, telephone, and high-speed Internet service for the equivalent of approximately $35 (adjusted for PPP). By contrast, in Lafayette, LA, the top American city, the cheapest available package costs around $65 and includes just a 6 Mbps Internet connection. A comparison of Internet plans available for around $35 shows similar results. Residents of Hong Kong have access to Internet service with symmetrical download and upload speeds of 500 Mbps while residents of New York City and Washington, D.C. will pay the equivalent price for Internet service with maximum download speeds that are 20 times slower (up to 25 Mbps and upload speeds of up to 2 Mbps).

The results add weight to a growing body of evidence that suggests that the U.S. is lagging behind many of its international counterparts, most of whom have much higher levels of competition and, in turn, offer lower prices and faster Internet service. It suggests that policymakers need to re-evaluate our current policy approaches to increase competition and encourage more affordable high-speed Internet service in the U.S.