Consent of the Networked

The Worldwide Struggle For Internet Freedom 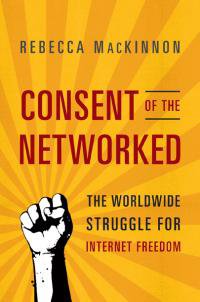 A global struggle for control of the Internet is now underway. At stake are no less than civil liberties, privacy and even the character of democracy in the 21st century.

Many commentators have debated whether the Internet is ultimately a force for freedom of expression and political liberation, or for alienation, and repression. Rebecca MacKinnon moves the debate about the Internet’s political impact to a new level. It is time, she says, to stop arguing over whether the Internet empowers individuals and societies, and address the more fundamental and urgent question of how technology should be structured and governed to support the rights and liberties of all the world’s Internet users.

Drawing upon two decades of experience as an international journalist, co-founder of the citizen media network Global Voices, Chinese Internet censorship expert, and Internet freedom activist, MacKinnon offers a framework for concerned citizens to understand the complex and often hidden power dynamics amongst governments, corporations, and citizens in cyberspace. She warns that a convergence of unchecked government actions and unaccountable company practices threatens the future of democracy and human rights around the world.

Consent of the Networked is a call to action: Our freedom in the Internet age depends on whether we defend our rights on digital platforms and networks in the same way that people fight for their rights and accountable governance in physical communities and nations. It is time to stop thinking of ourselves as passive “users” of technology and instead act like citizens of the Internet – as netizens – and take ownership and responsibility for our digital future.

"A growing number of people throughout the world are counting on the Internet to move their countries in a more democratic direction. Consent of the Networked describes what's happening, successes and failures, what's next, and what needs to be done. It's the real deal." —Craig Newmark, founder of Craigslist

"Fascinating and provocative...MacKinnon forcefully and passionately urges us to stake out our Internet rights before governments or corporations completely take those rights away from us." —Publishers Weekly

“Cyber power and governance of the internet is one of the great unsolved problems of the 21st century. Rebecca MacKinnon has written a wonderfully lively and illuminating account of the issues we face in this contentious area. It is well worth reading.” —Joseph S. Nye, Jr., University Distinguished Service Professor, Harvard University, and author of The Future of Power

"The Internet poses the most complex challenges and opportunities for human rights to have emerged over the last decade. Rebecca MacKinnon’s book is a clear-eyed guide through that complexity.” —Mary Robinson, Former UN High Commissioner for Human Rights and President of Ireland

"For nearly a decade, Rebecca MacKinnon has been at the center of evolving debates about how the Internet will affect democracy, privacy, individual liberties, and the other values free societies want to defend. Here she makes a persuasive and important case that, as with other technological revolutions through history, the effects of today's new communications systems, for human liberation or for oppression, will depend not on the technologies themselves but rather on the resolve of citizens to shape the way in which they are used." —James Fallows, Atlantic Monthly

"Consent of the Networked is a must-read for anyone interested in freedom of personal and political expression in the 21st century. It's accessible, engaging, and periodically hair-raising. It should have the same impact on public awareness of the vital issues surrounding Internet freedom that "An Inconvenient Truth" had with regard to climate change." —Anne-Marie Slaughter, Bert G. Kerstetter '66 University Professor of Politics and International Affairs at Princeton University and former Director of Policy Planning for the United States Department of State

"Rebecca MacKinnon brings clarity and reason to the often fraught debates over the internet's social and political consequences. Hers is a voice to be listened to." —Nicholas Carr, Author of The Shallows