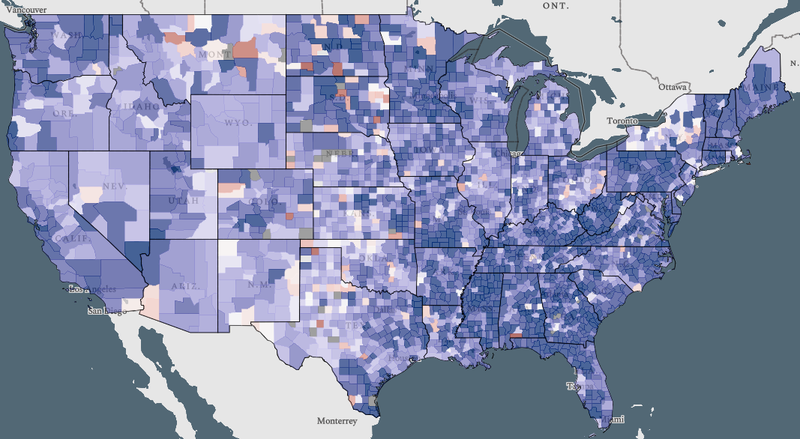 Broadband internet access is becoming more and more fundamental to everyday life. Accessing government services, completing homework assignments, and filling out job applications today requires fast and reliable internet access. But despite this need, that kind of access is hard or even impossible to find in many parts of the United States. There are plenty of policy proposals aimed at improving broadband penetration, but policy decisions should be based on accurate data, and there is widespread confusion about the ground truth when it comes to the speeds customers are getting from their ISPs. The USBB tool aims to help clear up that confusion.

The Federal Communications Commission (FCC) is responsible for providing statistics on the availability, speed, and cost of broadband internet access in the U.S. One way it does this is known as “Form 477” data, named for the numbered form that gathers the information. Form 477 data consists of self-reported details that ISPs are required to submit every six months describing the available broadband service in each census block. The FCC publishes the data on its website.

Despite the data made available through Form 477, it has a number of inherent issues. Because it is self-reported information about the ISPs’ networks, it can be hard to trust and nearly impossible to verify. It also doesn’t necessarily measure what speeds are actually available and used by people in a given area; ISPs are only required to report the speeds advertised in each census block, even if most customers there don’t subscribe to the highest tier. Additionally, ISPs can report that an entire census block is “served” by high-speed broadband if that provider can offer service to just one household or building in that census block. Finally, Form 477 data only reports the maximum speed of a hypothetical connection from a house to the ISP’s own local network. This can be useful information, but it’s not the only way to measure broadband speeds. Often, customers are much more interested in how fast their connection is to locations throughout the internet, where the most popular and vital everyday online platforms have their servers.

One method for getting a better sense of broadband accessibility and speed is through direct measurement. The Measurement Lab (M-Lab) project is one example of this method (full disclosure: Measurement Lab was started at the Open Technology Institute; it spun out to be its own organization earlier this year). M-Lab runs a global set of servers located in the same data centers where many internet backbone networks connect with each other. These centers are often where large content carriers like Netflix and Amazon keep their servers. Due to the careful placement of its servers, M-Lab can more accurately measure people’s lived experience of the internet. All of M-Lab’s source code is open source, and all of the data gathered is released publicly.

While Form 477 data has its uses, it is not an accurate representation of how most people use the internet. It focuses on a narrow interpretation of what it means to have internet access, and allows ISPs to claim current coverage of areas when that coverage is merely a possibility. M-Lab’s nationwide speed test data paints a different picture of broadband access in the U.S.; one that reveals a persistent and pernicious digital divide between prosperous urban areas and underserved rural communities. As schools, the government, employers, and others increasingly expect Americans to rely on the internet to access basic services, closing this divide is of paramount importance. We hope the USBB map will enable policymakers and providers to address the challenges of broadband access with data that is accurate and true to how millions of customers get online.

The United States of Broadband was made possible thanks to help from the Community Broadband Networks Initiative, the Institute for Local Self-Reliance, Measurement Lab, X-Lab, Georgia Bullen, Nick Thieme, and David Winslow.