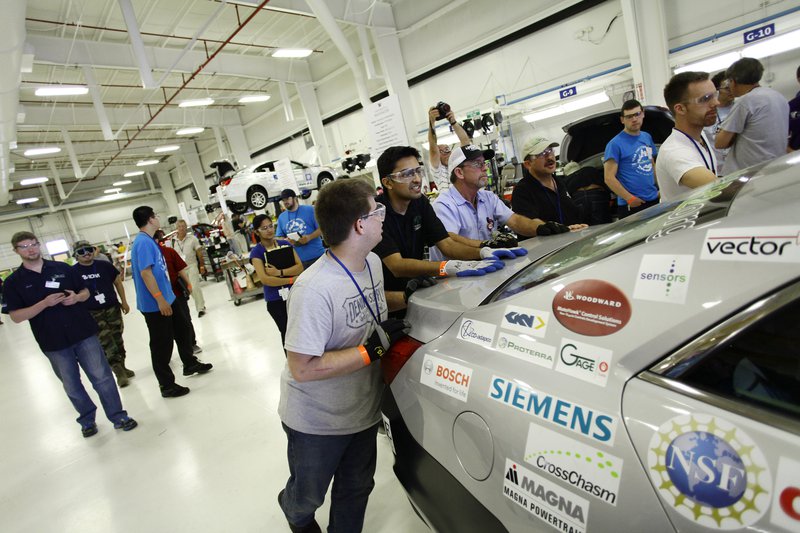 Washington, DC – New America announced today the launch of Opportunity@Work, a new civic enterprise to be based at New America and focused on “re-wiring” the U.S. labor market to enable more Americans to achieve economic opportunity and upward mobility in the job market and workplace.

Opportunity@Work will focus its efforts on the “demand side” of the labor market, seeking to facilitate collective investment by employers to develop the talent they need to succeed and grow, open up more accessible on-ramps into jobs, and to scale up innovations which unlock the potential of all people to master skills, qualify for better jobs, earn higher pay, and contribute more to the American economy.

New America welcomes Byron Auguste and Tyra Mariani as co-founders of Opportunity@Work to the New America family. “I could not be more delighted that Opportunity@Work is coming to New America,” said Anne-Marie Slaughter, New America CEO and President. “It captures the essence of our concept of a civic enterprise, linking big, important ideas about how to solve public problems with direct action on the ground. Our education policy group does some of the best work around on how competency-based education can give workers the leg-up they need to join the 21st century economy; Opportunity@Work will be putting many of those ideas into practice.”

“Meaningful work that contributes to a valued outcome, earns a family living, and builds human and social capital is essential to America’s promise of upward mobility and civic equality,” said Byron Auguste, co-founder of Opportunity@Work. “Even after more than a year of strong job creation, too many Americans are either out of work or treading water in working situations that neither tap their full potential nor offer a path to job progression or higher pay. Individually, employers can’t find the skills they need - because collectively, they underinvest in developing those skills, hire in ways that overlook much potential talent, and use technology more to automate tasks than to accelerate learning. Our economy has the potential for faster and broader growth in productivity, work, and wages, if our institutions can adapt the basis on which we hire, train, and use emerging technology to develop and deploy new skills more rapidly and flexibly – not only to fill open jobs, but to make the U.S. a magnet for high-value, high-paid work.”

The launch of this partnership at New America comes as President Obama announces today at the National League of Cities conference, the TechHire initiative, a public-private initiative currently in 20 American cities, states, and rural communities to empower Americans with the skills they need, through universities and community colleges but also nontraditional approaches like “coding boot camps,” and high-quality online courses that can rapidly train workers for a well-paying job often in just a few months.

“We’re excited to support the TechHire initiative as Opportunity@Work’s first project,” said Tyra Mariani, co-founder of Opportunity@Work. “We believe that employers’ demand for trained technology workers presents an opportunity to shift hiring and training towards a more responsive, inclusive system in which if you can learn the job and do the job, you can get the job. We’ve look forward to collaborating with other committed partners to unlock potential in communities across America. And New America’s leading insights into fast-changing education models will help us to translate policy into action.”

Prior to co-founding Opportunity@Work, Byron Auguste served for 2 years in the White House as Deputy Assistant to the President for Economic Policy and Deputy Director of the National Economic Council, where his policy portfolio included job creation and labor markets, skills and workforce policies, innovation, investment, infrastructure, transportation and goods movement.

Until 2013, Mr. Auguste was a senior partner at McKinsey & Company in Washington DC and in Los Angeles, where he was elected Principal in 1999 and Director in 2005. Over 20 years at McKinsey, he worked primarily in the fields of technology & communications, information & media, services-based businesses, education, economic development, and innovation, leading McKinsey’s High Tech Services sector from 2002 to 2006, and its global Social Sector from 2007 to 2012.

Until his appointment at the White House, Mr. Auguste was active in a number of not-for-profit organizations, serving as board chairman of Hope Street Group, and as a member of the boards of trustees of The William and Flora Hewlett Foundation and Yale University. He is a member of the Council on Foreign Relations and the Pacific Council on International Policy.

Prior to co-founding Opportunity@Work, Tyra Mariani was appointed Chief of Staff to the U.S. Deputy Secretary of Education and Deputy Chief of Staff to the U.S. Secretary of Education under the Obama Administration. In these roles, Mariani helped shape policies and programs impacting education from early learning through college and career. She also led complex interagency and cross-departmental teams that took several Administration priorities from vision to strategy and implementation including the President’s My Brother’s Keeper initiative and RESPECT, an effort to elevate and transform the teaching profession. Mariani was recognized as a key problem-solving partner to the Department’s senior leadership, helping them to overcome bureaucracy and accelerate their work and the agency’s priorities.

Prior to joining the Department of Education, Mariani launched entrepreneurial efforts to build human capital in the education sector as the founder of the Greater New Orleans Region of New Leaders. In this role, she developed and successfully executed a strategy to drive high academic gains in schools led by New Leaders principals in post-Katrina New Orleans.