Why we are failing to reduce emissions in time. How a climate dividends plan could overcome the psychological, economic, and political barriers. 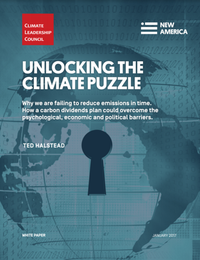 Today, on the first day of New America’s 2016 Annual Conference, founder Ted Halstead released a major report on how to solve climate change, and announced the launch a new international organization based on it.

The new report, Unlocking The Climate Puzzle, details the psychological, economic and geopolitical reasons that climate progress is deadlocked, and suggests that a climate dividends plan could overcome each of these barriers.  It also explores why this proposal is uniquely suited to our political moment, as it responds to five of today's defining trends: nationalism, inequality, populism, weak growth, and political polarization.

"The most effective, popular and equitable way to solve climate change is to combine a gradually rising carbon tax with climate dividends and border adjustments," said Halstead. "This is a rare plan where all parties can claim an important victory."

Halstead's newly formed Climate Leadership Council is an international research and advocacy organization whose mission is to mobilize global opinion leaders around this new policy framework.  It will establish offices in Washington, Beijing, Berlin and New Delhi.  Now in its startup phase, the Council will launch officially in January 2017.

More information can be found on the organization's new website.

New America provided critical early assistance in the birth of this new organization.

If you are a member of the media and want to speak with Mr. Halstead, please email Maria Elkin at elkin@newamerica.org.