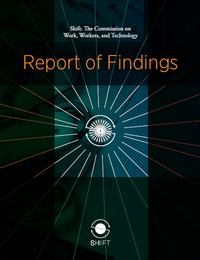 New America and Bloomberg today released the findings from a yearlong report produced by Shift: The Commission on Work, Workers and Technology, formed by both organizations one year ago to study the future of work in America. More than 100 leaders in business, technology, policy and academia took part in Shift's scenario planning sessions, and the Commission surveyed over a thousand American workers about their expectations for work. It also conducted multiple focus groups with workers.

The Commission outlined four core scenarios that could play out in the next 10 to 20 years, each reflecting whether there will be more or less work, and whether work will exist in the form of jobs or fragmented into "tasks." The report concluded that any of these four scenarios could work out well or poorly for America, depending on the response of leaders and communities. The report also concluded that most workers value certainty over making more money, and that society must provide new pathways to stability in work while empowering people to reap the rewards of risks taken.

"Capitalism has brought opportunity to billions of people around the world, and today the poorest Americans have higher living standards than the richest Americans in the 19th century," said Michael R. Bloomberg, founder of Bloomberg LP and Bloomberg Philanthropies, and 108th Mayor of New York City. "At the same time, disruptions at the heart of innovation also present challenges to workers whose skills are rendered obsolete. We need to give careful analysis to the shape of technological change and what it will mean for society – rather than the fear and wild speculation permeating the discussion today."

"Right now, wildly varying predictions about automation are driving the debate and we're all waiting to see what happens," said Anne-Marie Slaughter, President & CEO of New America and Co-Chair of Shift. "We need to stop waiting and instead start addressing changes that we can already see happening around us. The strength, health, and wealth of our country and economy depend on it."

You can find the full report here.

Bloomberg, the global business and financial information and news leader, gives influential decision makers a critical edge by connecting them to a dynamic network of information, people and ideas. The company's strength – delivering data, news and analytics through innovative technology, quickly and accurately – is at the core of the Bloomberg Professional service. Bloomberg's enterprise solutions build on the company's core strength: leveraging technology to allow customers to access, integrate, distribute and manage data and information across organizations more efficiently and effectively. For more information, visit www.bloomberg.com

New America is committed to renewing American politics, prosperity, and purpose in the Digital Age. We generate big ideas, bridge the gap between technology and policy, and curate broad public conversation. We combine the best of a policy research institute, technology laboratory, public forum, media platform, and a venture capital fund for ideas. We are a distinctive community of thinkers, writers, researchers, technologists, and community activists who believe deeply in the possibility of American renewal.