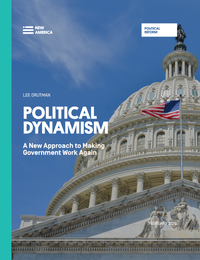 Our current political system is increasingly described as broken and dysfunctional. Our governing institutions are widely derided and distrusted. Economic inequality continues to rise, and economic dynamism continues to decline. To solve these problems, political reform is necessary. Yet, the current reform vision is often too simple:

In the campaign material of Bernie Sanders, the solution is “return to a government of, by, and for the people–not the billionaires and giant corporations.” In the telling of Ted Cruz, the end of our problems is in the breaking up "The Washington cartel"–the unholy "alliance of career politicians in Washington, in both parties, and the lobbyists in this town."

While such straightforward populism speaks the growing angers and anxieties, it has little to offer as a workable roadmap. Reforms work best when they work with the grain of our political system, rather than against it. The answer, in short, is more politics. In Political Dynamism: A New Approach to Making Government Work Again, Lee Drutman makes the case for political dynamism as an affirmative vision of politics, and lays out specific reforms that would create the conditions for it. Political dynamism is an attempt to work within the American political system that exists, playing to the strengths of our traditions and institutions.