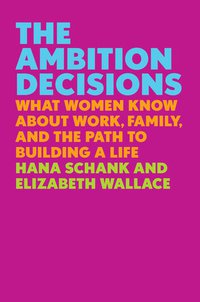 Over the last sixty years, women’s lives have transformed radically from generation to generation. Without a template to follow–a way to peek into the future to catch a glimpse of what leaving this job or marrying that person might mean to us decades from now–women make important decisions blindly, groping for a way forward, winging it, and hoping it all works out.

As they faced unexpectedly fraught decisions about their own lives, journalists Hana Schank and Elizabeth Wallace found themselves wondering about the women they’d graduated alongside. What happened to these women who seemed set to reap the rewards of second-wave feminism, on the brink of taking over the world? Where did their ambition lead them?

So they tracked down their classmates and, over several hundred hours of interviews, gathered and mapped data about real women’s lives that has been missing from our conversations about women and the workplace. Whether you’re deciding if you should pass up a promotion in favor of more flex time, planning when to get pregnant, or wondering what the ramifications are of being the only person in your house who ever unloads the dishwasher, The Ambition Decisions is a guide to the changes that may seem arbitrary but are life defining, by women who’ve been there.