All Jihad is Local

What ISIS' Files Tell Us About Its Fighters 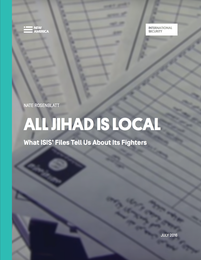 Until now, the threat posed by ISIS’ foreign fighters has been understood mainly through rough estimates of their countries of origin: 36,500 recruits have come from at least 100 countries since 2012, including 6,900 from the West, according to Senate testimony in February 2016 by U.S. Director of National Intelligence James Clapper. Analysts have also examined, albeit roughly, what factors drive militants to join extremist groups, such as joblessness and the spread of radical, violent ideology.

But to understand the nature of the global threat of violent extremism, the focus must be set on the local politics that created it in the first place. By using personal information volunteered by over 3,500 foreign fighters to ISIS officials—nearly 10 percent of the intelligence estimate—All Jihad is Local conducts the first quantitative analysis on the subnational origins of some of these fighters.

The data analyzed in this report come from foreign fighter registration forms collected by Islamic State of Iraq and al-Sham (ISIS) officials on the Syria-Turkey border between mid-2013 and mid-2014. These data, leaked in early 2016 by a defected ISIS fighter who stole the records before fleeing to Turkey, represent an unprecedented cache of personal information about foreign fighters, including names and phone numbers of family and friends and notes about fighters’ potential roles within ISIS.

With ISIS losing territory in Syria and Iraq, and some foreign fighters trying to return home, the war against ISIS may evolve from a battle over territory in Syria and Iraq to a decentralized fight against former foreign fighters committed to continuing the battle in their home countries. Learning who ISIS’ fighters are and where they come from is essential to developing effective policy responses to local conflicts that ISIS effectively links to its ideology and agenda.