Protecting Property Rights during and after the War in Ukraine 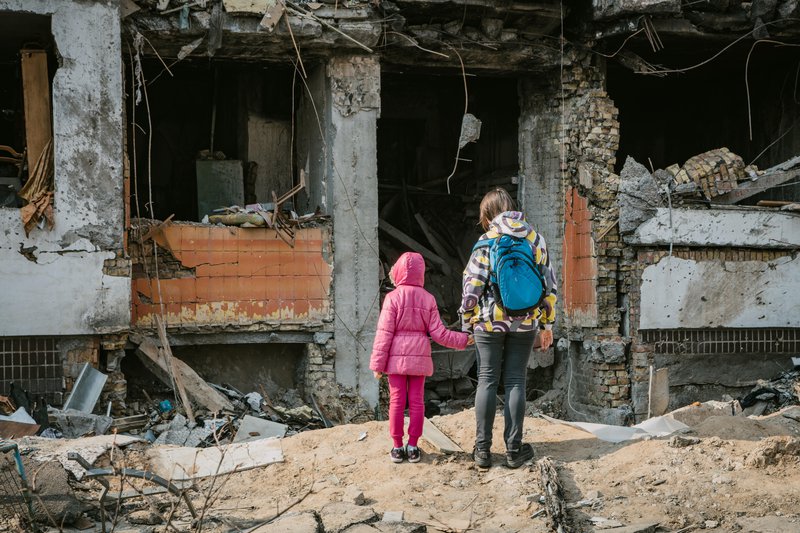 The full-scale war by the Russian Federation against Ukraine has already lasted for more than six months, and its toll is immense. Many thousands of civilians and tens of thousands of combatants have been killed. About 14 million Ukrainians have fled their homes and more than 1.2 million families have reported their homes damaged or destroyed. The losses to property include not only the physical destruction and damage of buildings and productive land plots, but also looting, forced evictions, and contamination with explosives, as well as damage of critical infrastructure (water, electricity, heating supplies, roads, social service infrastructure). The security of property rights within the occupied territories and combat zones is also undermined by destruction and looting of government offices and archives, and loss of formal documents confirming the legitimate rights of the property holders. Moreover, many property holders have been displaced and a parallel property management system has been created by the occupying forces particularly in areas occupied since 2014.

As of June 2022, Ukraine’s reconstruction and recovery needs toll is estimated at a minimum of $349 billion (the World Bank, 2022),[1] including reconstruction of damaged housing (which constitutes about 40 percent of the total damage). Moreover, the immense scale of the damage requires increasing government capacity to process the volume of forthcoming cases for compensation of damages and restitution of rights. International and national support for this process will heavily depend on the government’s ability to establish a fast, transparent, and just process of such compensation. This ability would significantly affect the speed and scope of the post-war reconstruction process.

This needs assessment was conducted in July-September, 2022 based on the review of statistical and administrative reports, legal and normative acts, and interviews with key Government of Ukraine (GoU) authorities including the Ministry of Justice, State Geocadastre, the Ministry of Development of Communities and Territories, the Ministry of Infrastructure, and the Ministry of Agrarian Policy and Food. The results of this assessment were discussed with a broader range of stakeholders during a validation workshop on September 27, 2022.

In the subsequent six sections, this assessment:

1. Baseline Analysis of the Infrastructure for Land and Property Rights and Property Management, Prior to the Invasion

The process of compensation and restitution of property rights will depend on the pre-war conditions of the government infrastructure in this sector. After Ukraine's independence in 1991, the system of state registration of rights to real property was repeatedly reformed. Before 2013, the main confirmation of the rights to land plots were special title documents—state deeds for ownership of land plots, as well as certificates of ownership of real property (for buildings and apartments). Rights to housing units acquired during the Soviet era and the first years of Ukraine's independence are also confirmed by registration by special communal companies—Bureaus of Technical Inventory (BTIs). After 2013, the official recognition and confirmation by the state regarding the origin, transfer or termination of rights to real property is carried out through entries in the electronic State Registry of Rights for Real Estate (Registry of Rights). However, the registry is only about 40 percent complete, and majority of property rights acquired before 2013 were not included in the registry. This share is much lower for the territories occupied since 2014.

A number of institutions have been involved in management of land and real estate rights before and during the war. Among them are:

Courts, notaries, valuators, surveyors, and several other public and private sector actors support the functioning of land and real estate markets and are involved in protection of property rights.

However, processing capacity is currently severely undermined by destruction and looting of local offices and displacement of staff. As a result, it is reasonable to expect that the government capacity in this sector is reduced by about 20 percent nationally, including almost complete lack of capacity in the occupied and de-occupied territories. This undermined system will have to handle the additional burden of processing millions of cases for compensation for damage and destruction of immobile property.

The problem of limited capacity will be exaggerated by cases where the owners or users of damaged property have lost documents that prove their property rights, and where no information is recorded in the Registry of Rights or found in the local archives.

Damage to residential and administrative buildings are currently being estimated by the National Council for the Reconstruction of Ukraine, the World Bank, and by the United Nations Satellite Centre (UNOSAT) team. Self-reporting by civilians has also been encouraged through the Diia portal, via the Ministry of Digital Transformation and by the RebuildUA project.

Based on reports by the Local Military Administration, the estimated number of households whose residential real estate was destroyed or damaged as of September 1, 2022 already exceeds 1.2 million housing units, affecting the rights of more than 3 million people. Donetsk, Luhansk, Kharkiv, and Kyiv (region) are among the most damaged regions. More than 85 percent of all known damaged buildings are located in these regions. In these regions alone, more than 800,000 families are affected and will require compensation. In some of the cities and villages (e.g. Mariupol and Lisychansk), the level of damage is above 70 percent of all buildings.

Damage to farmland caused by mining and unexploded ordnance pollution or damage to topsoil (craters, fortification, tracks by heavy equipment) have been estimated using indirect methods by the KSE Agrocentre together with the Ministry of Agrarian Policy and Food. An alternative approach is remote sensing based on satellite imaging (however, no publicly available results are available).

More than 5 million land parcels (13.5 million hectares) are at risk of mining and munition pollution, with estimated 1.3 million parcels that require re-cultivation as well as technical inspection before the land can be used safely.

3. Review of the Current GoU Response to the Invasion, in the Land and Real Estate Sector

In summary, property rights in GoU-controlled territory have not been limited, except for the introduction of the possibility of requisitioning property for the needs of the Armed Forces of Ukraine (which is used mainly in regions where active hostilities are taking place). However, property rights in the occupied territories and within the combat zone are substantially impacted. The GoU has taken several steps to initiate a process for compensation of losses.

4. Legislation for Loss Compensation and Recommendations for Its Improvement

The key component of property loss compensation and property rights restitution infrastructure is the proposed Law on Compensation. It outlines the procedure for compensating residents whose property has been damaged or destroyed as a result of the war. To be accepted into the law, the proposal has to be adopted in the second reading and signed by the Parliament’s Speaker and the President of Ukraine. Currently, proposed amendments are being collected by the authors of the proposal.

The proposed law, however, has significant limitations in terms of scope and feasibility of the proposed approach. The key concerns include:

Successful implementation of the Law on Compensation will depend on the government’s implementation capacity and steps taken in preparation for implementation. Interviews with relevant government authorities conducted in August, 2022 revealed the following needs for building up such capacity:

6. Urgent Needs of Ukrainian People and Government for Housing Reconstruction and Protection of Property Rights

Urgent needs of the Ukrainian people and government in the area of loss compensation and property right protection require special attention. Such needs include:

The above and several other complementary activities presented in this report will help to re-build and upgrade Ukrainian real estate and land markets in a reasonable timeframe and prevent undue stress and tension in all sectors of Ukrainian civil society.

This needs assessment was conducted by the Global Land Alliance and the Kyiv School of Economics, with funding from New America and in cooperation with the World Bank.