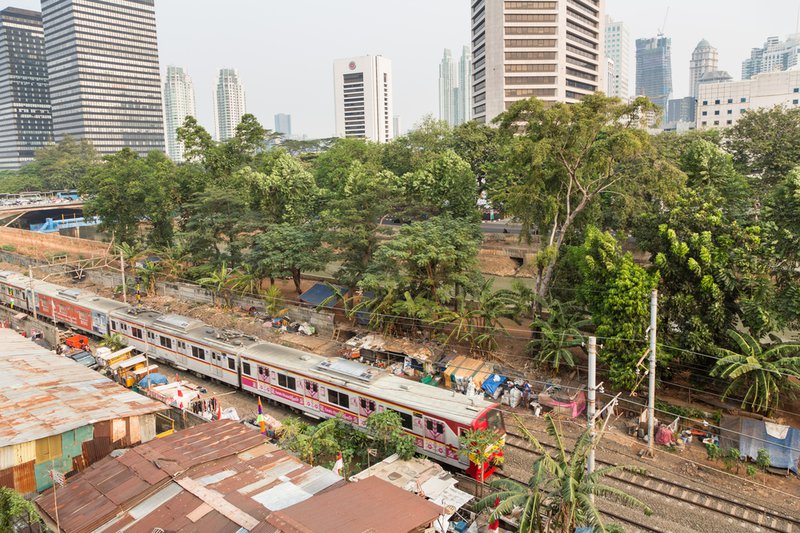 The first step toward prosperity is security. If an individual or family enjoys formal claim to their land which is protected by the rule of law, then they don’t have to guard it physically. While it may seem unthinkable to leave one’s home to return and find it razed or occupied, that is often a reality for 70 percent of the world’s citizens who reside in a property to which they have no formal claim. Being tethered to property means the property owner must make a living within proximity to his or her property, leaving little room to enter the formal economy. Secure property rights allow landowners to travel from their land for employment, and to let their land work for them.

Property rights formalization is, appropriately, often linked with economic prosperity.  Having a formal claim to one’s property -- whether it be land or a home -- allows that individual to benefit economically in three ways.  First, she or he can monetize the asset via a sale.  Second, she or he can move from one location to another to pursue employment opportunities, instead of being bound to an informal asset.  Third, she or he can raise capital, at reasonable rates, by having collateral. Having a formal claim to property also incentivizes the owner to invest in the property, confident that they will be able to capture the investment via sale or rental.

Here is an example from Landesa’s work in India:

Property rights have a direct impact on agriculture & food security. When subsistence farmers have a formal claim to their land, they are more likely to invest in it with sweat equity, by installing irrigation systems and using higher quality seeds. There is a growing body of evidence of the direct positive impacts of land rights on food security, with significant findings like how "in Ethiopia, land certification led to productivity increases of 40-45 percent in the Tigray Region."  When locals farmers demonstrate they see value by investing scarce resources in land formalization it is clearer that we are on the right track.  This is exactly what was seen in Ghana where there are formalization services available for a modest fee and cacao farmers have paid to formalize their plots.  When claim to the land is in question, however, farmers often turn to the “slash and burn” technique, which has contributed to widespread deforestation and pollution.

Property rights formalization is linked to other environmental benefits as well. When individuals and communities have formal property rights, they are more likely to look after their land. One example from Indonesia illustrates this.  When the government granted property rights to villagers in Indonesia’s Sembungan region. Deep in the rainforest, villagers immediately worked to protect their recently titled property. Like many areas of Indonesia, the Sembungan region was the victim of deforestation. In 2008, Sembungan villagers started a reforestation program to preserve and restore the forest. As of 2011, they have operated their ecotourism sites with many villagers working as tour guides. The region’s ecotourism is registered under Indonesia’s Ministry of Laws and Human Rights and has boosted incomes in the region.

Property rights formalization acts to make communities more resilient.   Formal property rights are both prevention and cure regarding crises.  With rights formalized, communities can more easily recover when things go wrong. Whether it be forced displacement, a natural disaster or war, formal property rights are integral to community recovery. Consider Haiti after the 2010 earthquake ravaged the nation. Here a calamity and weak land tenure system amplified each other to the detriment of the people of Haiti.   Thousands of people were displaced as the disaster destroyed their homes. Many of the displaced had no formal rights to their property, which allowed developers to seize the property, leaving 85,000 people remained displaced as of 2015. Five years after Katrina in New Orleans, by way of comparison, the cadastral maps remained the most sought after documents as recovery efforts continued.

The absence of formal property rights can lead to violence. According to the NGO Global Witness, more than three people are killed each week defending property from encroaching industries. Frequently, this is because 93 percent of property granted to commercial investors is already occupied or in use. A stark example of this has been seen recently in India, where large public infrastructure projects displace millions of people. Less than one-fifth of the displaced have been resettled.  Formal property rights would have increased the chances of thousands of displaced and threatened people to either reclaim their property or receive appropriate compensation.  Displacement as a result of infrastructure disproportionately affects marginalized communities.  Part of that marginalization is weak property rights, another example from North America is the Dakota Pipeline.

Property rights are a critical tool for women's empowerment.  There are a number of studies showing how land rights have a positive impact on women.  One recent publication based on USAID experience stated that in Tanzania, "women with strong land rights were 3 times more likely to work off-farm, earned up to 3.8 times more income, and were 1.35 times more likely to have individual savings."   As the issue of gender receives increasing attention in the development community, expect land rights to emerge as a powerful tool for empowering women.

The international community is increasingly recognizing the importance of property rights formalization. The United Nations’ Sustainable Development Goals, announced in 2015, explicitly address land in seven of the 17 listed goals.  Land issues are increasingly arising in development literature and news.