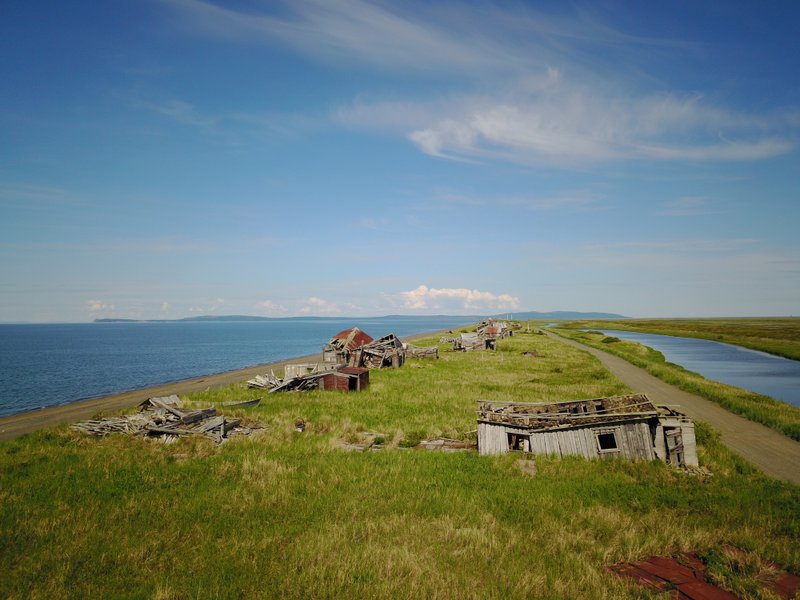 This June, severe flooding sent the town of Kwigillingok, Alaska underwater. For some communities, this would be an absolute worst-case environmental disaster. But for many Alaskan coastal towns, it’s simply a reality—and it’s only getting worse.

Climate change and rising sea levels are a major issue for Alaskan Indigenous communities, many of which are now considering village-wide moves. This policy is known as “managed retreat,” and it involves the proactive and coordinated movement of people, houses, and other infrastructure out of harm’s way. But this climate adaptation strategy comes at significant financial and cultural costs.

Some communities have determined that relocation is necessary, nevertheless, and are planning or already implementing relocation efforts. Yet there is no framework that deals with climate change displacement and no set approach for cooperation across tribal, local, state, and federal levels to aid this process. That needs to change as oceans continue to rise.

The Need for Relocation in Alaskan Indigenous Communities

Climate change is affecting the Arctic faster and more drastically than anywhere else on the planet. Most concerning for Alaskan villages and communities such as Kwigillingok are the resulting higher erosion rates, thawing permafrost, diminishing sea ice, and increased food insecurity.

Such issues are widespread. In 2003, a U.S. Government study found that 86 percent of Indigenous villages in Alaska–184 in total–were affected by rising seas. And in May 2021, the Arctic Monitoring and Assessment Program (AMAP) published its annual climate change update, emphasizing the increasing severity and seriousness of climate change on these communities specifically.

These aren’t concerns for the next generation–changes are now noticeable year over year.

“​​The animals that we rely on, the plants and fish that we rely on are not coming at the same times of the year as they did before. And sometimes they aren't coming at all,” observes Sam Schimmel, a St. Lawrence Island Siberian Yupik and Kenaitze Indian from Alaska, and former member of the State of Alaska's now-defunct Climate Action Leadership Team.

Many communities’ culture and identity are tied to their land and waterways. Without access to these resources, Indigenous Alaskans can’t hunt, which fundamentally harms community resilience. As Schimmel notes, “climate change is making it hard for us to practice our traditions, which is resulting in our youth and our communities being disconnected from who we are… our languages are being eroded just like our coastlines.”

So What Does Managed Retreat Look Like in Practice?

The village of Newtok in Southwest Alaska is a good example of the managed retreat process. Extreme rates of permafrost degradation, resulting in around 70 feet of land erosion per year, require the community to relocate to Mertarvik, a newly-created settlement nine miles away.

To better plan the relocation effort and to apply for funding, a group of tribal, local, state, and federal representatives established the Newtok Planning Group in 2006. But in 2019, thirteen years later, only a third of Newtok residents had completed the move.

Despite costing an estimated $100 million, this initiative left the majority of Newtok residents behind. Construction of roads and homes in Mertarvik is a slow process, and so is scraping together the grants to fund these activities. All the while, those still in Newtok are living without running water amid flood-damaged and neglected infrastructure.

Newtok has experienced considerable hardship throughout its relocation process—and that comes with access to FEMA funding, other federal grant support, and aid from the Alaskan state government. Other communities simply don’t possess the same level of resources—either monetarily or administratively—to engage in climate adaptation strategies that are as resource-intensive as managed retreat.

One example is Shishmaref, an Indigenous village located on the Bering Strait, which voted to fully relocate back in 2002. Despite securing a new location further inland in 2006, the town doesn’t have state- or federal -level funding to physically move.

Erosion and flooding are severe and have resulted in more emergencies over the past two decades. Without funding, Shishmaref continues to apply for assistance and to develop emergency preparedness steps for continued disasters. The next big storm may force residents’ displacement without any contingency in place.

At-risk Alaskan villages need greater resources for managed retreat, both financially and practically. But at present, there are no governance processes or frameworks in Alaska that help determine if and when communities need climate-related relocation and associated funding. This makes an already complex process that much more challenging.

Newtok can serve as an imperfect example for a solution: the Newtok Native Corporation, the federal Bureau of Indian Affairs, the Association of Village Council Presidents Regional Housing Authority, and the community all worked together to secure grants, engage in site control, and construct the new settlement. Through long-term voluntary collaboration across different levels of government, issues such as housing, road construction, and community layout were resolved. A voluntary relocation effort depends in large part on whether there is institutional support for relocation, community cohesion, and effective collaboration.

Still, many cases may struggle to follow this course, due to competition over available funding and resources.

It's Past Time to Get Serious About Sinking Villages

If communities cannot afford a full-scale relocation, they should develop innovative mitigation or other adaptation plans. Some villages in the Arctic are building homes that are more resilient to climate change and even work to combat its effects. In Nunavut, Canada, Inuit are creating housing to soak up sunlight and heat, and are attaching pumps to draw the heat out of land and keep permafrost cold. The Cold Climate Housing Research Center (CCHRC), headquartered in Fairbanks, Alaska, is also working to create homes based on traditional Arctic housing, featuring walls designed to imitate traditional sod as well as composting, waterless toilets that dry out waste for fuel. CCHRC even created a prototype “home-on-skis,” so that the house can be towed across the tundra as the ocean rises.

Another program that helps communities deal with climate change is the Building Adaptive and Resilient Communities (BARC) program. BARC assists local communities by developing policies and plans for adapting to the adverse effects of climate change, such as community risk assessments, planning and implementation support, and community stakeholder outreach. However, the program costs between $20,000 and $30,000 and cannot scale its efforts to help every village.

That’s why creating a framework for relocation is a critical step forward. Because climate-related displacement is only the just beginning, a framework to better organize managed retreat is necessary. Any guidance should be modular, eschewing a “one-size-fits-all” approach as every community is unique in their needs and the solutions that might work best.

A modular framework would be intrinsically bottom-up, existing as a pipeline through which communities could acquire funding and provide input into decisions about their future. It begins with assessing government agency involvement, creating multi-disciplinary working groups, identifying locations under threat and indicators for relocation—all with the goal of securing state and federal funding for a move.

There are not any examples of such a framework today, it could be useful to think about analogous consortiums of local NGOs, international organizations, and governments that have been created to address humanitarian needs in countries such as Haiti and Georgia.

While it may seem like managed retreat policies in Alaska are local or state concerns, climate-related displacement is truly a global problem. Developing innovative solutions for coastal communities across the state will not only help those immediately impacted by rising seas, but can also serve as a model for other sinking towns and cities.

As homes, schools, and businesses continue to fall into the ocean, it’s past time for stakeholders across all levels of government to step up and more effectively help vulnerable communities retreat inland.