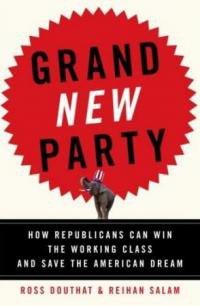 Grand New Party lays bare the failures of the conservative revolution and presents a detailed blueprint for building the next Republican majority. Blending history, analysis, and fresh, often controversial recommendations, Ross Douthat and Reihan Salam argue that it is time to move beyond the Reagan legacy and the mind-set of the current Republican power structure.

In a concise examination of recent political trends, the authors show that the Democrats' cultural liberalism makes their party inherently hostile to the interests and values of the working class. But on a host of issues, today's Republican Party lacks a message that speaks to their economic aspirations. Grand New Party offers a new direction -- a conservative vision of a limited-but-active government that tackles the threats to working-class prosperity and to the broader American Dream.

With specific proposals covering such hot-button topics as immigration, health care, and taxes, Grand New Party will shake up the Right, challenge the Left, and force both sides to confront and adapt to the changing political landscape.

An excerpt of this book is available in The Wall Street Journal.

Whether or not readers will agree with the tenor of their arguments, rarely have moderate conservative ideas been so intelligently streamlined and so self-consciously pruned of conservatism's hairier iterations

BY: Adam Doster, In These Times

There have been other outstanding books on how the G.O.P. can rediscover its soul (like “Comeback” by David Frum), but if I could put one book on the desk of every Republican officeholder, Grand New Party would be it.

Several Republicans have written books to figure a way their party can get out of its mess. McCain should take the time to read the best of them: Ross Douthat and Reihan Salam's forthcoming Grand New Party.