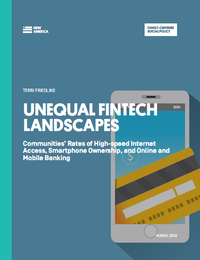 An array of financial technologies—referred to by their shorthand “fintech”—is credited with the potential to solve issues of financial access. Fintech leverages online and digital technologies, and is poised to transform where, when, and how households can deposit paychecks, pay bills, send money, or retrieve credit scores—and to expand access to households and communities that have been historically excluded or marginalized. In the process of expanding access, fintech may also dilute any negative effects from communities’ lack of financial services.

At the same time, unequal fintech landscapes threaten to undermine its potential for expanding access. Communities have varying rates of high-speed internet access, and many households experience disruptions in their phone and internet service. Lower-income households could lose access to financial services and their money when their phone or internet service is disrupted. Moreover, lower-income communities tend to have lower-than-average rates of owning or using these digital and financial technologies.

This report presents data on fintech landscapes in US communities, including high-speed internet access, smartphone ownership, and online and mobile banking. The descriptive findings contribute to growing conversations on the relationships between fintech, brick-and-mortar financial services, communities’ demographics like race and poverty, and urban and rural geographies. The findings reveal whether and how fintech can expand access to financial services, under what conditions, and the communities that may benefit the most.

Communities have unexpectedly low rates of high-speed internet access, smartphone ownership, and online and mobile banking, suggesting that fintech may not currently be compensating for limited access to financial services. These low rates also suggest that fintech has plenty of room to expand.

Unequal fintech landscapes disadvantage poor white communities and communities of color. In other words, communities with higher percentages of poor households—especially at intersections of race and urban and rural geographies—have lower rates of accessing or using fintech.

National trends in fintech and the concentration or density of financial services mask disparities in access that are prevalent in local communities.