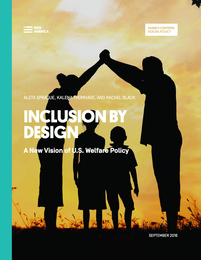 Nearly fifty years ago, thousands of welfare recipients organized rallies and protests in 57 cities across the country, urging reforms to the United States’ anti-poverty programs. Beyond the demand that they had a right to the provision of their basic needs, their protests focused on the pervasive practices within the public assistance system that treated them as the “other,” such as unannounced home inspections and police officers placed within the welfare office.  By claiming that all Americans, by nature of their social citizenship, should be able to secure adequate shelter, food, and clothing without sacrificing their dignity—and have a voice in the policy decisions that affected them—they were defending their right to be included.

Today, despite the “end of welfare as we know it” in 1996, exclusion remains a defining feature of the U.S. welfare system—and the platform of the National Welfare Rights Organization as a whole remains strikingly relevant. Participants in anti-poverty programs still often must submit to significant intrusions of privacy as a condition of receiving a paltry amount of assistance. Unannounced home visits persist in some parts of the country, while drug tests have become commonplace in many others. These practices in turn perpetuate a perception of safety net programs as rife with fraud and abuse, despite evidence to the contrary. As in the sixties, opposition to U.S. anti-poverty programs also remains deeply racialized, and policymakers strategically deploy coded racial rhetoric when proposing reforms to reduce benefits or tighten eligibility requirements. Meanwhile, the voices of people in poverty are rarely considered when policy decisions about these programs are made. As a result, stigma plays a more active role in shaping policy than the people affected by it.

The evidence of stigma manifested through exclusion is pervasive and exemplified by the many restrictions imposed on what benefits families receive, how they receive them, and how they are to be used. The level of cash assistance available to families in poverty to use at their own discretion has plummeted in recent decades in favor of more politically palatable in-kind benefits—goods or services restricted to specific uses, such as housing or food. Distrust and surveillance were codified in recent legislation that required states to prevent benefits from being accessed at strip clubs, casinos, or liquor stores, which resulted in some states disabling thousands of ATMs and others threatening benefits recipients with fraud charges if they withdrew cash at a prohibited location. Additionally, these benefits are commonly delivered through sub-par financial products without basic consumer protections and limited functionality, and recipients are frequently prohibited from saving even a modest emergency fund as a condition of eligibility. These practices have the immediate consequence of further limiting the value of an already limited amount of resources that families need to meet urgent needs, but also have the less obvious but more insidious effect of relegating poor families to poor financial products and directing families to engage in counterproductive financial behavior. In this way, the social exclusion that stigma breeds in welfare policy design also breeds financial exclusion.

Although the U.S. approach to poverty reduction continues to reflect many of the same shortcomings as policies of the past, new models and innovations are offering  promising alternatives. In particular, a growing body of evidence suggests that more cash-based, flexible models of assistance do more to alleviate poverty and promote financial inclusion, while reducing the stigma attached to benefit receipt that has undermined the reach and effectiveness of the U.S. system. Furthermore, efforts both within the U.S. and in other parts of the world have shown that it is feasible to invite and successfully incorporate the input of people living in poverty in the design of anti-poverty initiatives. This paper will explore the historical factors and racial stereotypes that have shaped U.S. welfare policy, evaluate alternative models piloted in the U.S. and other countries for lessons they can impart about creating a more inclusive and effective system in the U.S, and, finally, distill these lessons into recommendations for state and federal policy design.