How Features of Payday Loans Vary by State Regulation

Results from a Survey of Payday Lenders 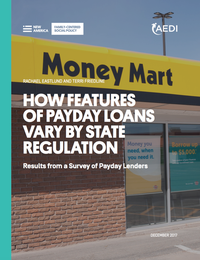 The payday loan industry is subject to state regulations and, in effect, the costs associated with these products vary geographically. These variations mean that borrowers in different states assume different costs—and different financial consequences—associated with payday loans. For example, states set different caps on interest rates and the amounts that a consumer can borrow. They may limit the number of times a borrower can roll over a loan. Some states have made the shift to installment loans that require that the loan be broken up into several smaller, more affordable payments. Other states, under pressure from consumer advocates, have placed major restrictions on or outlawed payday loans altogether.

The high price that low-to-moderate income borrowers pay to use payday loans can undermine their financial well-being.

Payday lenders in states that do not place restrictions on interest rates have a larger variance in the amounts of interest that they charge.

Payday lenders allow fewer rollovers than permissible by state regulations, suggesting lenders could be trained to not advertise rollovers to potential borrowers or that they could be moving away from this practice.