How Do Changes to 529 Rules Affect Children’s Savings Account Programs? 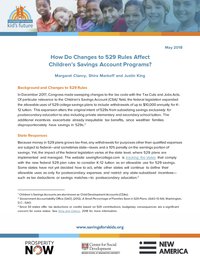 Background and Changes to 529 Rules

In December 2017, Congress made sweeping changes to the tax code with the Tax Cuts and Jobs Acts. Of particular relevance to the Children’s Savings Account (CSA)[1] field, the federal legislation expanded the allowable uses of 529 college savings plans to include withdrawals of up to $10,000 annually for K-12 tuition. This expansion alters the original intent of 529s from subsidizing savings exclusively for postsecondary education to also including private elementary and secondary school tuition. The additional incentives exacerbate already inequitable tax benefits, since wealthier families disproportionately have savings in 529s.[2]

Because money in 529 plans grows tax-free, any withdrawals for purposes other than qualified expenses are subject to federal—and sometimes state—taxes and a 10% penalty on the earnings portion of savings. Yet, the impact of the federal legislation varies at the state level, where 529 plans are implemented and managed. The website savingforcollege.com is tracking the states that comply with the new federal 529 plan rules to consider K-12 tuition as an allowable use for 529 savings. Some states have not yet decided how to act, while other states will continue to define their allowable uses as only for postsecondary expenses and restrict any state-subsidized incentives—such as tax deductions or savings matches—to postsecondary education.[3]

[3] Since 30 states offer tax deductions or credits based on 529 contributions, budgetary consequences are a significant concern for some states. See King and Clancy, 2018 for more information.