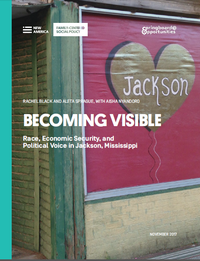 Carla* is a mother of two in Jackson, Mississippi. Her son is a precocious three-year-old who “knows all the answers” and “goes to work” every morning by mimicking the tasks performed by the community's maintenance workers, like cutting the grass and removing the trash. Her daughter is an imaginative 11-year-old who still relishes the activities of childhood, like playing with dolls.

Though she holds multiple degrees and certificates and worked in a variety of fields, Carla has put her own ambitions on hold to care for her elderly mother and disabled brother, whom the family calls “Boo boy.” “Who else is going to help my family if I don’t?”

This is a pattern she’s followed through her adult life—first at age 18 to stay home and care for her eight-year-old brother and four-year-old sister as her mother finished her college degree and began work in her field. Now, at age 35, she’s resuming this role to allow her sister the same opportunity to successfully transition from college to career. “She’s the baby. She needs to be focused on her education, not focusing on trying to take on all of this.”

For the last year and a half, Carla has been trying to get back on the career path she detoured from so others in her family could progress on theirs. But it’s been harder than she expected given her educational achievements and previous experience. “Either you're overqualified or underqualified. It’s always something. It's like right when you feel like you're on the runway and your plane's going to take off, then you get the little call on the end. We got to land real quick because they got to check the engine.”

In the meantime, she says, “It’s not like I’m not being productive.”

Indeed, beyond the daily care and attention she dedicates to the wellbeing of her family, Carla is vigilant to the needs of the members of her community more broadly. She recounts a time when the neighborhood school discontinued bus service to her community, leaving the elementary aged children, in the absence of sidewalks, obligated to navigate a road pockmarked with potholes where cars routinely exceeded the speed limits. Concerned for their safety, she improvised a bus using her 18-passenger van. “I used to pick up all the kids, take them all to school. Drop them all off, pick them all up every day, just because we didn't have a bus and because I didn't want to see them walking. It's too much.”

At the end of her “mom’s day” Carla longs to be invisible. She closes her eyes and insists to her son that she’s disappeared, while he laughs and shouts “I can still see you!” As close as she can come to entertaining this fantasy is slipping outside her apartment and taking a few moments to herself on the patio.

But she is denied even this indulgence. The apartment Carla shares with her children is in a public housing property that has imposed an 8:00 P.M. curfew for residents. Ostensibly, this decision is to prevent crime, though she hasn’t observed that to be a problem. Instead, it conforms to other sets of arbitrary stipulations, like prohibiting kids from riding bikes and skateboards, which communicate to residents that they may live there, but this isn’t their home. “All the rules make sure you know that.”

Carla’s experience and those of the other women elevated in this report are emblematic of how the ways in which they show up in their lives and community go unseen. Their incidental status as living in poverty is assigned a definitional role in shaping how they are perceived and what they deserve. These views conform to narratives, cultivated over centuries, that view Black Americans, especially Black women, with suspicion, and create the justification for efforts to police and punish behavior.

These false narratives aren’t isolated to public housing communities in the former Confederacy; they are deeply embedded within the social policies tasked with delivering the American promise of broadly shared economic opportunity.

This outcome is abetted by the current practice of policymaking where the beliefs, interests, and ideological attitudes of those making policy are given far greater credence than the actual needs, wants, and experiences of those impacted by policy. Specifically, within anti-poverty programs, the deeply entrenched belief that poverty is solely a consequence of individual choices permeates policy conversations and proposals, despite deep and compelling evidence of poverty’s legal, institutional, and structural causes. As a result, bias and assumptions are translated into inequitable and exclusionary policies and programs.

Mississippi is an established exemplar of this approach. The state has taken full advantage of its flexibility to administer public benefits programs and tighten their eligibility requirements to provide among the most meager and least accessible assistance in the nation. Mississippi’s most recent piece of welfare legislation, the Medicaid and Human Services Transparency and Fraud Prevention Act, perpetuates a myth-based narrative about waste, fraud, and abuse, by funneling millions of dollars to a private auditor to double check the eligibility of public assistance households. The act also includes a wide array of provisions that restrict benefits and access by framing low-income people as irresponsible, immoral, and untrustworthy. Examining Mississippi’s policy choices from the perspective of the families they impact is a critical exercise as policymakers at the state and federal level work to replicate and scale similar policy choices within other programs.

This report, a partnership between New America’s Family-Centered Social Policy program and Springboard to Opportunities in Jackson, Miss., combines the stories of women like Carla taken from focus groups and interviews with analysis of historical and contemporary policy design in order to:

Importantly, these models stand on rich histories of thought leadership and activism within the Black community to reform the systems that were designed to exclude them.

This report attempts to reveal how policies created through racial exclusion and oppression are maintained behind a veneer of race-neutrality, and to reject reform efforts that tinker at the margins of this system. In doing so, what we are calling for is nothing less than a new approach to making social policy based on our oldest beliefs about democracy and opportunity that truly affirms the equal humanity and dignity of all people.

On October 16, 2017, Family-Centered Social Policy was pleased to partner with Springboard to Opportunities and Aspen Ascend to host a discussion featuring residents of Jackson, MS in an effort to center real families in policy and practice. Click below to see a Storify of that conversation.