The Next Social Contract: An American Agenda for Reform 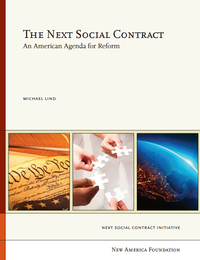 The American social contract is in crisis. Even before the Great Recession exposed its inadequacy, it was clear that the existing American social contract — the system of policies and institutions designed to provide adequate incomes and economic security for all Americans — needed to be reformed to meet the challenges of the twenty-first century. What is needed is not mere incremental tinkering, but rather rethinking and reconstruction. Policies that have worked should be expanded, while others that have failed should be replaced. The result should not be just a modification of today’s partly failed economic security system, but a substantially reformed system incorporating the soundest elements of the old — a new social contract for a new America.

Click here to read "The Next Social Contract: An American Agenda for Reform," by Michael Lind.