No Discount: Comparing the Public Option to the Coupon Welfare State 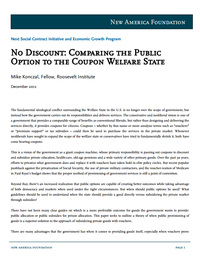 The fundamental ideological conflict surrounding the Welfare State in the U.S. is no longer over the scope of government, but instead how the government carries out its responsibilities and delivers services. The conservative and neoliberal vision is one of a government that provides a comparable range of benefits as conventional liberals, but rather than designing and delivering the services directly, it provides coupons for citizens. Coupons – whether by that name or more anodyne terms such as “vouchers” or “premium support” or tax subsidies – could then be used to purchase the services in the private market. Whenever neoliberals have sought to expand the scope of the welfare state or conservatives have tried to fundamentally shrink it, both have come bearing coupons.

This is a vision of the government as a giant coupon machine, whose primary responsibility is passing out coupons to discount and subsidize private education, health-care, old-age pensions and a wide variety of other primary goods. Over the past 30 years, efforts to privatize what government does and replace it with vouchers have taken hold in elite policy circles. But recent popular pushback against the privatization of Social Security, the use of private military contractors, and the voucher-ization of Medicare in Paul Ryan’s budget shows that the proper method of provisioning of government services is still a point of contention.

Beyond that, there’s an increased realization that public options are capable of creating better outcomes while taking advantage of both democracy and markets when used under the right circumstances. But when should public options be used? What guidelines should be used to understand when the state should provide a good directly versus subsidizing the private market through subsidies?

There have not been many clear guides on which is a more preferable outcome for goods the government wants to provide: public allocation or public subsidies for private allocation. This paper seeks to outline a theory of when public provisioning of goods is a superior solution to the approach of subsidizing private goods with vouchers.

There are many advantages that the government has when it comes to providing goods itself, especially when vouchers prove problematic. When the government itself produces a good it can contain costs in markets where supply is constrained, standardize products to solve information problems, ensure basic levels of quality and use scale and compulsion to efficiently provide social insurance. Publicly produced goods move choices in the marketplace to choices democratically made, emphasizing democratic accountability and access. This can give it an advantage over many problems with vouchers, including distributional effects, visibility and control over intermediation.

Click here to read the full paper, "No Discount: Comparing the Public Option to the Coupon Welfare State," by Mike Konczal.