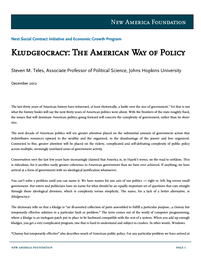 The last thirty years of American history have witnessed, at least rhetorically, a battle over the size of government. Yet that is not what the history books will say the next thirty years of American politics were about. With the frontiers of the state roughly fixed, the issues that will dominate American politics going forward will concern the complexity of government, rather than its sheer size.

The next decade of American politics will see greater attention placed on the substantial amount of government action that redistributes resources upward to the wealthy and the organized, to the disadvantage of the poorer and less organized. Connected to this, greater attention will be placed on the rickety, complicated and self-defeating complexity of public policy across multiple, seemingly unrelated areas of government activity.

Conservatives over the last few years have increasingly claimed that America is, in Hayek’s terms, on the road to serfdom. This is ridiculous, for it ascribes vastly greater coherence to American government than we have ever achieved. If anything, we have arrived at a form of government with no ideological justification whatsoever.

You can’t solve a problem until you can name it. We have names for one axis of our politics — right vs. left, big versus small government. But voters and politicians have no name for what should be an equally important set of questions that cuts straight through those ideological divisions, which is complexity versus simplicity. The name, for a lack of a better alternative, is kludgeocracy.

The dictionary tells us that a kludge is “an ill-assorted collection of parts assembled to fulfill a particular purpose…a clumsy but temporarily effective solution to a particular fault or problem.” The term comes out of the world of computer programming, where a kludge is an inelegant patch put in place to be backward compatible with the rest of a system. When you add up enough kludges, you get a very complicated program, one that is hard to understand and subject to crashes. In other words, Windows.

“Clumsy but temporarily effective” also describes much of American public policy. For any particular problem we have arrived at the most gerry-rigged, opaque and complicated response. From the mind-numbing complexity of the health care system (which has only gotten more complicated, if also more just, after the passage of Obamacare), our Byzantine system of funding higher education, and our bewildering federal-state system of governing everything from the welfare state to environmental regulation, America has chosen more indirect and incoherent policy mechanisms than any comparable country.

The great agenda of the next four years of the Obama administration, and probably the nation’s next thirty, is coming to grips with kludgeocracy. But to understand how to treat our government’s ailment, we first need to understand what the side effects of complexity are, and why American government is so chronically sick in the first place.