Beyond the Low-Wage Social Contract 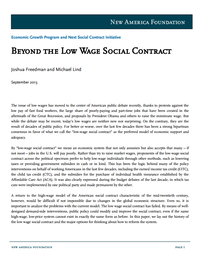 The issue of low wages has moved to the center of American public debate recently, thanks to protests against the low pay of fast food workers, the large share of poorly-paying and part-time jobs that have been created in the aftermath of the Great Recession, and proposals by President Obama and others to raise the minimum wage. But while the debate may be recent, today’s low wages are neither new nor surprising. On the contrary, they are the result of decades of public policy. For better or worse, over the last few decades there has been a strong bipartisan consensus in favor of what we call the “low-wage social contract” as the preferred model of economic support and adequacy.

By “low-wage social contract” we mean an economic system that not only assumes but also accepts that many – if not most – jobs in the U.S. will pay poorly. Rather than try to raise market wages, proponents of the low-wage social contract across the political spectrum prefer to help low-wage individuals through other methods, such as lowering taxes or providing government subsidies in cash or in kind. This has been the logic behind many of the policy interventions on behalf of working Americans in the last few decades, including the earned income tax credit (EITC), the child tax credit (CTC), and the subsidies for the purchase of individual health insurance established by the Affordable Care Act (ACA). It was also clearly expressed during the budget debates of the last decade, in which tax cuts were implemented by one political party and made permanent by the other.

A return to the high-wage model of the American social contract characteristic of the mid-twentieth century, however, would be difficult if not impossible due to changes in the global economic structure. Even so, it is important to analyze the problems with the current model. The low wage social contract has failed. By means of well-designed demand-side interventions, public policy could modify and improve the social contract, even if the same high-wage, low-price system cannot exist in exactly the same form as before. In this paper, we lay out the history of the low wage social contract and the major options for thinking about how to reform the system.