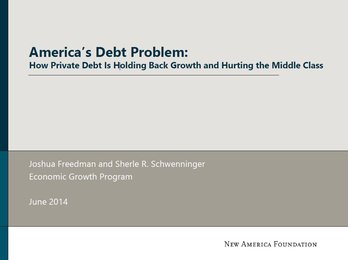 Over time, the US economy has become more dependent on debt to fuel economic growth. American households, in particular, have become dependent on debt to maintain their standard of living in the face of stagnant wages. Rising levels of private debt have also fueled consecutive investment asset bubbles, whose bursting not only caused the Great Recession but also left a large and burdensome debt overhang that is still being dealt with today.

In the aggregate, households have paid down some of the huge increase in private debt that occurred over the past several decades. But household debt levels remain much higher than they were in the 1990s before the tech and housing bubbles. The current level of household debt is sustainable only if interest rates remain low and housing values continue to rise. Many indebted households remain exposed to a rise in interest rates. More household deleveraging is therefore needed.

While some deleveraging has occurred in the aggregate, the lower and middle classes still face a serious debt burden. Lower and middle-income households have much higher debt burdens than do upper-income groups.

America’s private sector debt overhang has far-reaching implications for economic growth. Household deleveraging has hurt consumption and housing, two of the main drivers of economic growth. Even more worrying, many types of debt have increased but productive investment has not as more private and public debt has been used for non-productive purposes. Since the beginning of the Great Recession, government debt has risen but government investment has actually fallen. And corporate debt has been used increasingly for share buybacks and dividend payments rather than for new investment. As a result, the economic growth potential of the economy has declined – a worrying sign for the future.