Toward an Overlapping Consensus 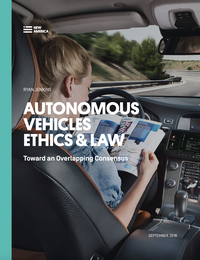 There is a clear presumptive case for the adoption of autonomous vehicles (AV). It is widely believed they will be safer than vehicles driven by humans. For example, AV will not become sleepy, distracted, or angry behind the wheel, and will be better able to detect and avoid hazards and collisions with other drivers and pedestrians. Because car accidents kill around 30,000–35,000 people per year in the United States alone, and because around 94% of crashes are due to driver error, the case for AV from increased safety and lives saved is extremely compelling.

Even mildly optimistic predictions concerning AV show that they could provide significant benefits in terms of social costs of death or injury, as well as increased convenience and productivity time for the individual consumer.

However, it would be unreasonable to expect AV to be perfect. Software and hardware undergo continuous development, and their failures are sometimes catastrophic. Since there is nothing intrinsically different about the software and hardware to be used in AV, the same possibility for catastrophic failure exists—witness the failure of Tesla’s autopilot system in May 2016. And unlike programming for much software and hardware, the set of conditions AV can be expected to face on the road is an “open set”: manufacturers cannot exhaustively test every scenario, since they cannot predict every possible scenario. Manufacturers will be unable to ensure that AV are totally prepared to drive on their own, in all conditions and situations.

In light of this, stakeholders must think carefully about what requirements should be met before AV are allowed on the roads. What kind of discrimination capabilities should AV have before it’s permissible to deploy them? Is it merely enough that AV be superior to human drivers? How should AV be programmed to behave in the event of a crash, and is it permissible for them to change the outcome of a crash by redirecting harm? Or should we be worried about people who are killed or injured by AV when they would not have been otherwise? These and other issues are explored below, synthesizing the perspectives of philosophers, lawyers, and manufacturers, in search of an overlapping consensus on the development and deployment of autonomous vehicles.