Could a technologist code of ethics help shift the norms and standards of the global tech industry toward a rights-respecting digital future? 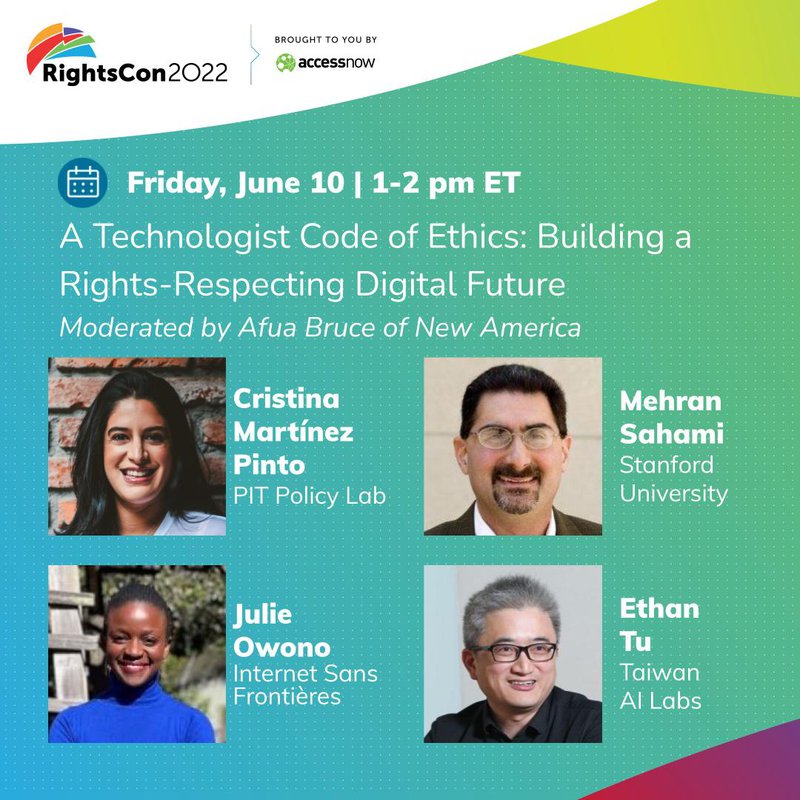 At RightsCon 2022, USAID Administrator Samantha Power and New America CEO Anne-Marie Slaughter announced a collaborative effort between USAID and New America to support the drafting of a new technologist code of ethics. As a follow-up to this announcement, a panel discussion, A technologist code of ethics: building a rights-respecting digital future, featuring technologists and civil society leaders, delved into the potential for a code and the role of norms and culture in building a rights-respecting digital future.

Afua Bruce, author of The Tech That Comes Next: How Changemakers, Philanthropists, and Technologists can build an Equitable World, moderated the panel and discussed the code and the challenges that the process may face with the following public interest technology panelists:

The panel opened with a conversation about the merits of a code of ethics that focuses on shifting the values, norms, and culture of the tech development, workforce pipeline, and industry, and how the code could be leveraged alongside policy and regulatory work. Owono discussed how a multi-stakeholder approach for outlining a code of ethics is necessary in our increasingly interconnected world where the impact of tech and those who participate in the development and deployment span multiple sectors.

Owono explained, “So it's really high time that we, you know, have this conversation about how everyone has a role to play to safeguard democracy. It's not just the governments. It's not just the activists like myself. It is also the role of private companies, private creators, to think about how we can better protect our shared values and democracies now. What would be the challenges? The first challenge, of course, is who is going to define that code of ethics.”

Given technologists' key role in the development and deployment of technology, the global tech industry is a prime place where values are incorporated into technology and potential adverse impacts can be identified and mitigated.

Sahami discussed the importance of where technologists learn, work, and receive funding in facilitating the implementation of such values.

“I think the important thing to keep in mind is that ethics is a practice, not a destination. And so it's not just a matter of thinking of when we get to a place where we check a box and say we're ethical, but what is the kind of culture we build around that kind of practice always being taken.”

Martínez Pinto continued the conversation by pointing out the importance of the global South community in the convening and drafting process of a technologist code of ethics, especially as those who will experience the most severe negative impacts of algorithms and data-driven technologies over the next decade are the same people who have the least amount of control over how they are built, deployed and governed. They are overwhelmingly from the global South.

“Even where there can be agreement around a certain set of principles, I think operationalization and implementation will look very different to different actors in different regions. And I think it's also important to recognize that shifting norms and culture, which is what we're trying to do with this initiative, takes time and time we often do not have because we're struggling to keep up with the rapid technology development.”

She continued, “I think that a challenge that we're facing as public interest technologists is, as I mentioned, is the field has grown exponentially in the United States but not necessarily around the world. So there is an opportunity and an urgent need to convene thought leadership in the technology governance space representing different regions to come up with plans to engage local technical systems, not only to discuss viewpoints on how we could draft this specific code, but actually how are we thinking on the building of this field, if we're aiming towards a democratic, digital future.”

Then, panelist Tu offered insight from his own experience on what key principles could be included in a code of ethics and what the consensus process around those principles may look like. He discussed the difficulty in reaching cross-border consensus, but with the rise of AI in our daily life from social media to sales to healthcare, there are several movements to make sure algorithms are transparent, auditable, and created responsibly.

“I think in Taiwan, when we develop a new technology, we actually have three core values we want to emphasize: one is human centered value, sustainable development value, and also the diversity and inclusion value.”

Both the panelists and audience raised a number of questions and challenges which will be foundational to future convenings in this area:

At the end of the panel, New America’s Digital Impact and Governance Initiative opened a brief survey for the panel audience to offer feedback on a new technologist code of ethics. The survey will remain open throughout the summer.

If you are interested in more information, and prefer not to engage with the survey, but want to be kept in the loop, please email DIGI@newamerica.org to be added to our distribution list as public roundtables are convened.