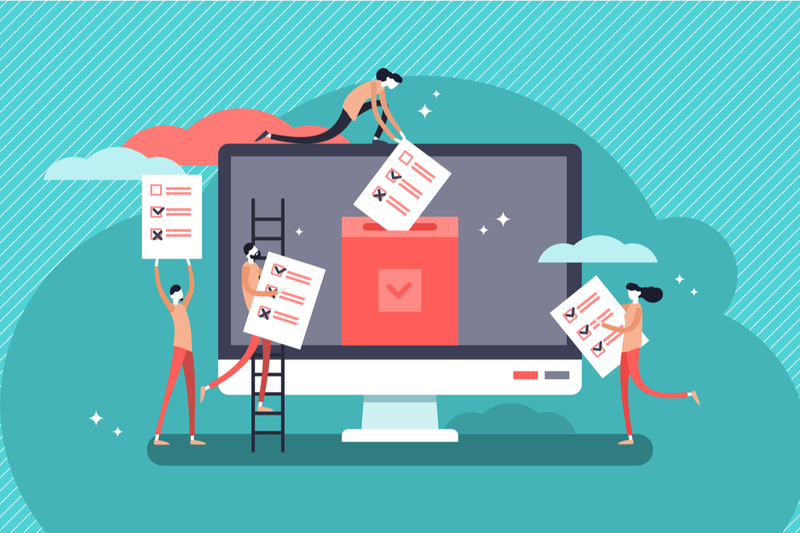 Trusted and accurate elections, as perceived by citizens, are the bedrock of democratic legitimacy. For many, the word “democracy” is synonymous with voting. They are massive undertakings: voting, counting, and results tabulation need to be conducted rapidly, transparently and with very narrow margins for error. They are also uniquely vulnerable to disinformation. As seen in the aftermath of the 2020 U.S. presidential election, even the perception of an unfair election is sufficient to delegitimize candidates at the end of a fair election. Since blockchain technology can safeguard data from tampering in a transparent way, could this technology strengthen free and fair elections?

In this final blog post in our Building Trust in Democracy series, we will explore the various ways blockchain technology might help democracies conduct effective elections (make sure to check out the first and second blog too). Given the particular sensitivity of election administration, we conclude with a few special considerations to help election officials understand the risks of integrating new technologies into elections.

Voter accessibility challenges are not just confined to physical obstacles. Malicious actors can also obstruct voters from election participation by manipulating voter registration information, undermining the legitimacy and trust in an electoral outcome.

In some cases, citizens may be concerned about their ballot being altered, discarded, or replaced after they cast their votes either in-person or via the mail.

Online voting is a controversial subject which has generated as much enthusiasm as it has scorn and ridicule. However, large segments of voters, such as those living in remote areas, expatriates, people with physical disabilities and other marginalized communities, can face obstacles to voting in person and already vote remotely. Mobile device voting holds the potential to increase participation in the electoral process.

Mobile voters must be confident that their choices will not be changed or lost due to cybersecurity threats like computer viruses or hacking. Developing software using open source principles generally results in more secure code thanks to collaborative and independent security experts who scan for vulnerabilities and directly fix bugs. Insecure or faulty software can undermine the voting process, the legitimacy of the vote, and importantly the perception of a fair and honest election process that jeopardizes this fundamental political institution.

Independent monitoring bolsters the legitimacy of election results by incorporating unbiased observation of election processes and ensuring that stakeholder in elections cannot subvert fair competition. Election observation groups, political parties, and the media can and should play a critical role in pushing for election technology implementations that are secure and independently auditable.

Special Concerns with New Technology in the Election Process

Elections are high-stakes activities with little room for error, or ability for correction after the fact. Risks to election integrity are magnified with the introduction of a new technology. To reinforce the validity and legitimacy of elections, some safeguards must be observed:

Where do we go from here?

Throughout this blog series, we have outlined core components of a successful blockchain technology pilot and examples of how blockchain could serve as effective tools to strengthen democracies. Whether for improving transparency and accountability of core government functions, electoral access and integrity, or civil society engagement, blockchain technology may serve an important role in the digital transformation of democratic societies, strengthening accountability between citizens and government while bolstering inclusion in public decision-making. Trust in data reinforces trust in institutions.

So why haven’t we seen broad proliferation of this technology into public services? Well-intentioned novel technologies are difficult to implement, and given the core importance of democratic institutions to our society, the stakes are high. Slow, steady, and isolated pilots of this new technology will not only help leaders implement it correctly and successfully, but will give the public time to learn about this technology and perhaps gain familiarity and trust. As the end of the pandemic comes into view, democracy advocates have an enormous opportunity to redesign government service delivery institutions to be as effective, efficient, and equitable as possible, proving to people around the world that democracies can deliver better for their people – while demonstrating that new tools can preserve their rights and empower their voices.