A Human to Know: Michael Berhane

A conversation with the co-founder of People of Color in Tech. 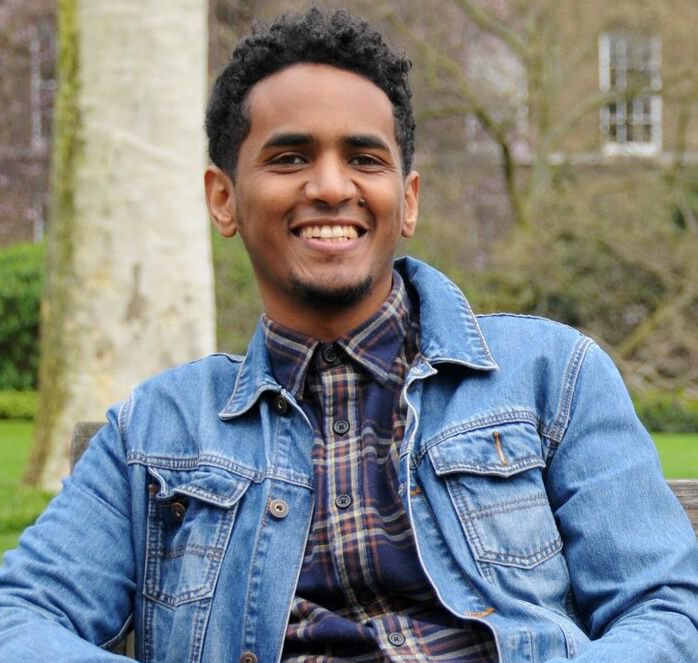 When he was 24, Michael Berhane knew he wanted to switch careers from business to software engineering. But he had a major barrier to overcome before he could: his imposter syndrome. “I considered myself too old,” he said. “I thought all engineers started out hacking as 13-year-olds.” He couldn’t see anyone making the career work who looked like him.

Though Berhane ultimately won the battle with his imposter syndrome, it made him wish for a resource that could’ve helped him win faster. Something to help dispel the myths he held about what an engineer looks like, and what the ‘right’ career path in tech is – particularly for people of color.

He had an idea for an interview series with people of color in technology, “intended as nothing more than a fun side project for myself and co-founder Ruth Mesfun.” Just a few weeks after he sent Mesfun the first few Whatsapp messages about the idea, they completed the first few interviews and People of Color in Tech (POCIT) was born.

Almost immediately, POCIT became much more than a side-project.

“The demand was overwhelming,” Berhane recalls. “People resonated with it as soon as we launched. Within eight weeks we were in TechCrunch.”

Today, they’re producing other content, including a new podcast ( a mix of tech and culture news that Berhane describes as "part C++ part Cardi B") and are curating a recruitment platform, “so now we not only tell the stories of people of color in tech, we help create new ones.”

I asked Berhane a few questions over email recently about POCIT, mistakes that white allies make, and how the U.S. and the U.K. compare when it comes to the diversity in tech conversation. Our edited conversation is below.

We often hear stories about how women and people of color are at a disadvantage when in tech, because of implicit (and explicit) bias and discrimination. But I'm curious -- are there any ways that you think it's an advantage to be a person of color in tech?

You often bring a much-needed perspective in regards to product development. Often there is a mismatch between the generally white homogenous teams that develop a product and the usually more diverse user base. For example, Black people tend to drive a significant amount of the cultural output from platforms like Twitter/Instagram, hence "Black Twitter," but what's the percentage of Black employees at those companies?

If you’re the child of immigrants, or are one yourself, you also bring a global perspective to tech, which has a habit of focusing on fixing 'first world problems' – hence the umpteenth laundry app we saw a few years back.

You're a British citizen. How do the U.K. and the U.S. compare when it comes to not just talking about D&I, but creating inclusive cultures for people of color in tech?

While there's still much room for improvement in the U.S., the conversation in the U.K. is still lagging even further behind. A lot of it is cultural. People in the U.K. find discussing race in principle uncomfortable, so much so that our version of Black History Month faced efforts to rebrand it Diversity Month. Therefore, the majority of the small effort made for D&I centers primarily around gender.

What are the biggest misperceptions and mistakes that white colleagues make when attempting to be an ally to a person of color in tech?

Not being mindful that the tone of your conversation is assuming diversity equates to lowering the bar. Or that the focus on diversity or inclusion is the just the remit of H.R people, is nice to have or is some sort of charitable endeavor.

Why the focus on storytelling with POCIT?

My favorite recent book Sapiens talks about how what separates humanity from other species is our ability to create social realities and understandings through stories that allow us to cooperate flexibly – e.g. currency, nation-states, political ideologies, etc. We are hardwired to think in stories; they are what resonate with us innately.

When we talk about the power of role models we are talking about seeing yourself within a story and knowing its possible for you to partake in it. Our audience can read the career journey of a young black woman in tech, or a Syrian refugee learning to code, and use it to reaffirm their rightful place within the tech ecosystem.

At Humans of Cybersecurity, we think a lot about how and whether the challenges for underrepresented groups in cybersecurity are different than those faced by those same groups in other tech subfields. Have you seen certain patterns or trends when it comes to challenges that people of color face in specific subfields? In other words, is it harder to be a programmer vs. an engineer?

I'm not sure necessarily about the dichotomy of programmer v. engineer. But what I tend to see is much more impostor syndrome when it generally comes to people in more "technical" positions versus those who are in product management, marketing or sales for example

It's probably because there's been a lifetime of propaganda about what an engineer is, what they look like, how old they are, what kind of school they attend (we can all picture the young white Stanford dropout a hoodie). We've had countless stories of people feeling because they don't meet specific criteria – such as age or academic background – they couldn't possibly be a developer. Hopefully, at POCIT we are having an impact on unwinding those narratives.

I never really plan more than 3-6 months as a founder just out of sheer practicality, but hopefully, in 5 years we are still telling and creating stories of POCIT and serving our community!