Human Resources Both Drive and Limit China’s Push for Automation 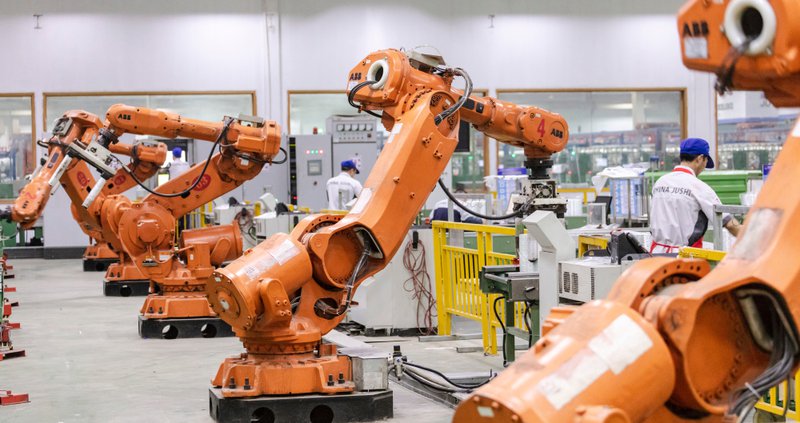 This article was published as part of the Stanford-New America DigiChina Project's second special report, "AI Policy and China II: Ethics, Governance, and Strategy." To view other articles in this series and access further resources on AI policy and China, please visit the special report's homepage.

For China’s government planners, one of the most important roles for artificial intelligence (AI) and automation is addressing looming challenges in the labor market. After nearly four decades of the one-child policy, China’s aging population is growing, while the number of working-age people (15-64) is decreasing. When the labor force was abundant, wages were low, helping drive the country’s rapid economic growth.

“But the demographic dividend began to vanish in 2016,” Shen Kaikai, a 44-year-old factory owner in China’s eastern Zhejiang province, said in an interview. His business is manufacturing accessories for diesel generators and exporting them, primarily across Southeast Asia. In 2016, the average hourly wage for factory workers in China hit U.S.$3.60, a 64 percent hike from 2011. Shen now writes paychecks to about 250 workers. But even as wages rise, Shen struggles to make new hires.

For Shen and many other employers struggling to find workers amidst rising costs and a labor shortage, automation is the logical next step. Once the economics put them in reach, increasingly capable industrial robots can also be better than workers at performing precise movements.

This shift is favored by China’s government planners. For example, the Made in China 2025 strategic plan, a 2015 roadmap for the future of China’s manufacturing industries, underlines what it calls “intelligent manufacturing” as a major priority and necessity for China to overcome the challenges of growing international competition and domestic economic deceleration. Made in China 2025 became a major point of contention with U.S. and European governments because of its aims to capture market share for domestic Chinese producers in strategic industries. But the plan and other Chinese policy thinking also reveal concerns about adapting to changing internal market conditions, and the transition to a more automated economy also faces human resources challenges.

Internationally, one prominent concern about increased automation is the potential for automation to replace whole job categories, leading to destabilizing levels of unemployment. This is also a concern for some in China, but not everyone shares such pessimism. “The fear of unemployment caused by industrial robots doesn’t exist in China,” said Zhou Shuopeng, founder and CEO of Jenvei Technology, an online education platform for artificial intelligence and robotics that also serves as a sales agency for course-related automation equipment. Before launching the company, he spent a decade and a half in the industrial robot research and development field.

From Zhou’s perspective, the better-educated younger generation is the foundation for large-scale deployment of automated manufacturing. In 2018, the higher education enrollment rate in China was 48.1 percent, compared to 9.8 percent 20 years ago. “Working-age people will be able to participate in our nation-building in a more efficient way,” Zhou said by text message.

Layoffs didn’t happen in Shen’s factory, either. When he adopts new automation equipment that replaces humans, he said, he always trains and tasks the displaced employees with other work, because there is often a labor shortage. He might use them to open a new production line. “It’s like, if I needed 10 people to do something previously, and I only need five now, I will have these five people do something else for me.”

Still, concerns about automation’s impact on workers remain. In 2016, news about electronics assembly giant Foxconn “replacing 60,000 workers with robots” caused public alarm. One of the company’s plants reduced its workforce from 11,000 to 5,000 in three years, as the adoption of automation proceeded swiftly. However, follow-up reports suggested that the decrease in workers is less about automation and more about salary expectations and the younger generation’s shrinking interest in dull factory life. The reality was, even with the industrial robots in place, Foxconn still needed more workers than it had.

Nevertheless, the fact that widespread automation-driven unemployment hasn’t happened in China doesn’t mean it won’t happen in the future, something official documents such as the State Council’s New Generation Artificial Intelligence Development Plan indicate is on the government’s radar. The country is still in an early stage of industrial transition. Shen Kaikai acknowledges that he doesn’t need to lay anyone off, because his transition to automation is slow, limited in budget, and small in scope. This means the volume of displaced workers is manageable for relocating to other positions. In a more rapid and thorough transition, the situation might be different.

One tool to protect workers and prevent widespread unemployment is education. It is also the key to fostering talents required to become a manager, technician, engineer, or scientist—jobs crucial to operating, maintaining, researching, and developing AI-powered industrial technologies. These kinds of skilled workers involved in implementing intelligent automation are both highly desired and scarce.

“Talent is fundamental” is listed as one of the “guiding ideologies” for the Made in China 2025 plan. Accordingly, government documents emphasize talent development to achieve broad goals—one example being the 2017 “Guidelines on Manufacturing Talent Development Planning” issued by China’s Ministry of Education, Ministry of Human Resources and Social Security (MHRSS), and Ministry of Industry and Information Technology (MIIT).

The Guidelines detail an ideal shape of the manufacturing talent pool targeted for 2020: “Manufacturing practitioners should have an average of 11 years of education, the proportion of people with higher education should reach 22 percent, high-skilled talent should account for 28 percent among all skilled workers, and R&D personnel should account for 6 percent of all practitioners.”

The document also specifies the fields where planners seek to cluster talent and predicts the demand for each by 2025:

One section of the document outlines the methods to foster talent. It emphasizes the significance of combining education with hands-on practice, use of overseas resources to cultivate high-level talent, and supporting vocational training for technicians.

“The talent cultivated by college education doesn’t fit the actual needs of industry,” said Zhou, the educational entrepreneur. “The curricula to foster high-end (master’s and doctoral-level) talent is out of touch with real-life practice. So currently, the most crucial thing is to cultivate practical talent.” This view motivated Zhou to develop an education platform and guided the types of courses it offers.

The majority of people taking the company’s online courses are highly educated, Zhou said. About 40 percent are graduate students or lab researchers and 50 percent are people already working in the automation industry with a higher education degree.

For those with a limited educational background, there are also resources designed to prepare them for automation. For instance, industrial robot technicians are in high demand. According to MIIT, China will adopt more than 1 million industrial robots by this year and will need more than 200,000 practitioners for their successful operation. Last April, the MHRSS announced that industrial robot operators and maintenance personnel were new official job categories.

According to Southern Metropolis Daily, in 2019, there were 634 vocational schools across the country offering industrial robot–related courses. In 2013, there were only two.

But the gap between classroom curriculum and onsite practice not only exists in higher education but also in vocational training. On Baidu Tieba, a popular online forum in China, discussions are vibrant under the topic of Industrial Robots. Thirty-two thousand netizens follow this sub-forum, where more than 57,000 posts have accumulated. In one, titled “Friends, Don’t Get Fooled by Vocational Schools,” the poster complains that what the schools teach is too different from what actually happens in factories, and they condense instruction too much in order to hasten completion, because speed is one of their selling points. The post laments that schools might promise a guaranteed job, but in reality they only provide hiring leads, and salaries are usually lower than advertised. The poster says that the first job they got out of training only paid 4,000 renminbi a month (U.S.$560).

In another thread, someone posted that they worked three months after studying at an institution, saying, “I think the employment situation is quite good. At present, many companies using robotics are recruiting. Salaries vary. As a reference, people around me usually get paid 5,000 renminbi [a month] (U.S.$700).”

Subsidies That Don’t Get All the Way to Profitability

Educational resources might not always be the most pressing issue. In the district where Shen lives, for example, the local government provides training for existing employees if a manufacturing company wishes to upgrade. But it still doesn’t make financial sense for him to do so, even with government support. “It only covers less than 1 percent of the cost,” Shen said. “For example, I have 200 machines that each cost 50,000 renmbinbi (U.S.$7,000). If I upgrade, a new imported machine will cost 4 million renmbinbi (U.S.$560,000).” Even with the upgrade, they are still making the same product, so revenue would not rise drastically.

The government’s strategic plan hopes companies like Shen’s can create higher-end products with upgraded machines. But in reality, the key factor that makes a product “high-end” is not necessarily how intelligent the industrial robots are, but rather whether researchers, scientists, and engineers actualize a groundbreaking innovation. And as far as Shen can see, China has been short-sighted, failing to foster a friendly and encouraging environment that cultivates world-leading scientists. “Most people no longer want to do research,” he said. “They would rather work in finance or become an actor so they can make more money.”