Sizing Up Impact: Measuring the Economic Growth Generated by a Catalytic Investment in Chicago 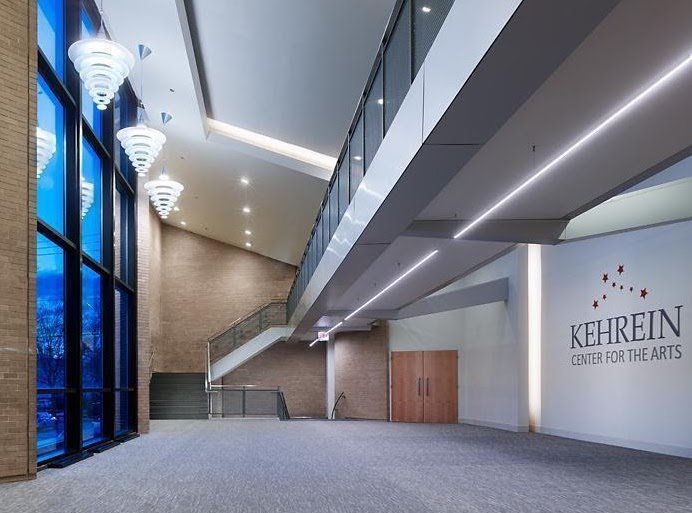 For nearly 50 years, a large historic building now known as the Kehrein Center for the Arts was just one of many shuttered properties on Chicago’s west side. It sits in a vibrant neighborhood known as Austin, which boasts a strong, active network of nonprofits and community activists. However, decades of disinvestment have been a challenge in the neighborhood. Among other things, sixty-five percent of households make under $50,000, in an area where seventy-five percent of residents are Black(1). In 2019, this vacant property was transformed from a dormant building into a state-of-the-art auditorium through $5 million of grants and donations.

Multi-million dollar investments like this arts center are rare in communities like Austin, Chicago. Part of the reason is that it can be challenging to measure their economic benefits and prove their ROI. That’s why the Mastercard Center for Inclusive Growth and New America recently partnered on a philanthropic data analytics initiative to assess whether strategic investments can help catalyze significant economic growth in disinvested neighborhoods.

The Kehrein Center for the Arts was developed by a local organization called Catalyst Schools—in partnership with Rock of Our Salvation Church and Circle Urban Ministries—and is located on one of their campuses. “We have a big commitment to the community,” says Catalyst Schools co-founder, Edmund Siderewicz. “The school is not an island--it's part of the neighborhood and we stand arm in arm with our community partners and leaders.”

Siderewicz adds, “We worked tirelessly with local partners like Austin Coming Together to ensure that the project fully met community needs and is rooted in the neighborhood’s quality-of-life plan.” Armed with architectural plans provided pro bono by Eckenhoff Saunders, the renovation was funded through a mix of private donors and government grants. For example, it received a $1 million grant from the Chicago Neighborhood Opportunity Fund. State legislators also secured $1.25 million in capital grants(2). Today, the space is a home for the Sistema Ravinia Orchestra, arts programming, and community conversations. After the center’s grand opening, its developers and donors alike waited to see how it would impact the neighborhood.

Analysis by a team of Mastercard data scientists found that the Kehrein Center for the Arts has not only brought music, community, and life to the neighborhood of Austin—but it also drove significant economic growth. Mastercard generated spending insights that were based on anonymized and aggregated transaction data, and derived via robust analytic techniques. The analysis showed that the center triggered an economic revitalization, just as its developers had hoped. Indeed, this single investment had a domino effect across the entire commercial corridor where it is located(3). The data showed: 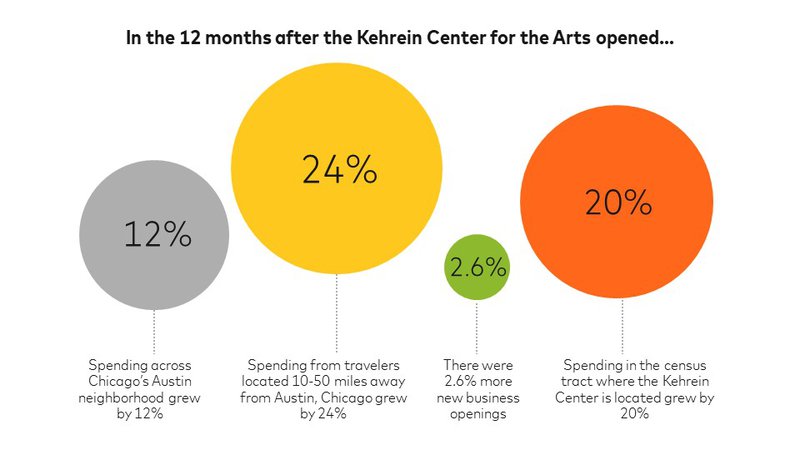 These insights were derived via Mastercard’s patented software, Test & Learn®, which uses a scientific method to measure the impact of a “test” scenario versus a “control” baseline. The platform is designed to pinpoint the true cause-and-effect of an investment with analytic precision. The software is typically licensed by corporations to measure the ROI on business investments; however, Mastercard volunteers also use the platform for pro-bono engagements such as this one.

One cornerstone of Mastercard’s Test & Learn® software is a set of algorithms that identify a relevant control group to serve as a baseline comparison point. In this analysis, the software identified that census tracts in local Chicago neighborhoods such as Rogers Park and Garfield Ridge(4) were similar to Austin based on key financial metrics—for example, economic growth trends, spending volumes, and seasonality in spending. 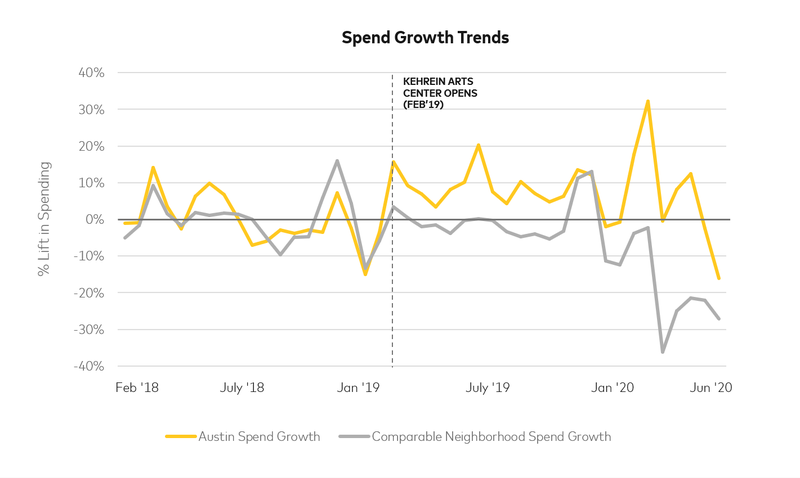 Siderewicz notes “These new data insights really validate our mission to revitalize the neighborhood. Not only did the project drive positive community-building impact, but it also catalyzed economic growth.”

This novel use of test vs. control analytics in urban planning is just the beginning of a trend in making more data-driven policy decisions. It helps show that large, anchor investments can catalyze the revitalization of an entire economic corridor. Furthermore, it illustrates the concrete, lasting impact that strategic investments can have in low-income communities. And, it demonstrates that investing in the arts can yield meaningful returns far beyond the art space itself.

(3) Our analysis was conducted using data from January 2018 through June 2020. Given the beginning of the COVID pandemic in March 2020, the last three months of data were impacted by high unemployment rates and store closures.