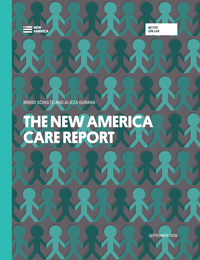 In the past 50 years, the experience of the American family has undergone a sea change. In the mid-twentieth century, breadwinner-homemaker families were not only more the norm, but held up as the ideal. Today, there is no one “typical” American family. And in a majority of families with children under 18, all parents work for pay outside the home. That means, on any given day, about 12 million children under the age of five will need a safe place to go and someone loving to care for them.

A good early care and learning system should support the healthy development of children, particularly at a time when their brains are rapidly growing and laying the foundation for all future learning. A functioning system should sustain the financial stability and health of families, promote opportunity and equity, support and sustain businesses, and help the economy thrive. And an effective system should be built on three pillars: affordable cost, high quality, and easy availability.

That is not happening in the current fragmented, patchwork system.

The Care Index, a data and methodology collaboration between New America, Care.com and others, examined cost, quality, and availability data in all 50 states and the District of Columbia and found that no single state does well in all three categories. Instead, families, providers, and policymakers in every state make difficult compromises that often shape family decisions and can determine the course of children’s futures.

The short version, then, is that the Care Index found that the early care and learning system isn’t working. For anyone.

But this is meant to be the beginning, not the conclusion, of this conversation. The New America Care Report uses the Care Index as a jumping off point to explore the complexity of the fragmented child care system. Using the Care Index cumulative scores, we divided states into quartiles, from highest to lowest, and traveled with a video crew to one state in each quartile in each region of the country to report on the consequences of the trade-offs between cost, quality and availability.

We profile a caregiver in Massachusetts, one of the highest rated states in the Care Index, who still makes poverty wages and relies on food stamps after decades doing a job she loves and considers important.

We write about Georgia, in the second quartile, a state that was one of the first to adopt a universal pre-K program, where infant care is nevertheless so expensive, low quality and difficult to find that one family began paying $1,450 a month, on top of the $1,375 for their three-year-old, just to reserve one of the few spots in a quality center before their child was even born.

In Illinois, in the third quartile, we tell the story of the owner of a high-quality Montessori School who, instead of turning away low-income children when a state budget crisis wiped out funding for child care subsidies, took out a high risk personal loan.

And in New Mexico, a state with one of the lowest cumulative scores, the highest rate of child poverty and a growing population of children who speak a language other than English at home, we show how the high cost of care has driven many families into the cheaper, informal gray market.

The Care Index‘s findings are drawn from a variety of sources including unique, proprietary Care.com cost data, including the cost of nanny care, and a new Care.com national survey of more than 15,000 households with children under 18 in every state conducted in October 2015, as well as data from the U.S. Census, and the National Association for the Education of Young Children, among other sources.

The New America Care Report proposes systemic change to the early care and learning infrastructure, including additional public and private investment in early care and learning; better training; pay and professionalization of the teaching workforce; as well as select innovative policy recommendations to help make high quality care more affordable and accessible to all families, including: