Men and Care in the United States

The data supporting the Better Life Lab's work on the cultural and structural barriers to men taking on a more equitable caregiver role. 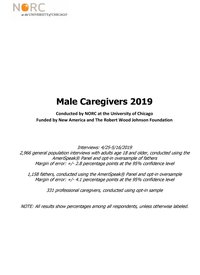 In order to better understand the experiences of and attitudes toward men who provide care, the Better Life Lab worked with NORC at the University of Chicago to collect nationally-representative survey and focus group data. After releasing the Lab’s six reports and removing identifying information from the datasets, we are ready to make the data publicly available to researchers, reporters, academics, and other interested parties.

Between April 25 and May 16, 2019, NORC at the University of Chicago, in partnership with the Better Life Lab, fielded a nationally representative online and phone survey of 2,966 adults residing in the United States. The average interview length was 14 minutes with an overall margin of error of +/- 2.75 percent. The survey was conducted in English and Spanish by NORC (in partnership with Dynata) on its AmeriSpeak platform and included an oversample of fathers of children ages zero to eight. Panelists were offered the cash equivalent of $3 for their time. However, the cash equivalent was increased to $7 toward the end of the field period.

The Better Life Lab also conducted five three-day long online discussions using 20|20 Research’s facilitation platform called QualBoard. 20|20 recruited and screened focus group participants for each of the online discussions. The focus groups were conducted over four weeks in May 2019 and included a total of 68 participants who were compensated for their time. The five groups included:

More about the data and methodology can be found here.

We are also making the raw data set publicly available. For access to the SPSS or STATA files, please email us at betterlifelab@newamerica.org.

This study was conducted with support from the Robert Wood Johnson Foundation and Pivotal Ventures, an investment and incubation company created by Melinda Gates.